‘Thriller’ in store in the RDS this Halloween… 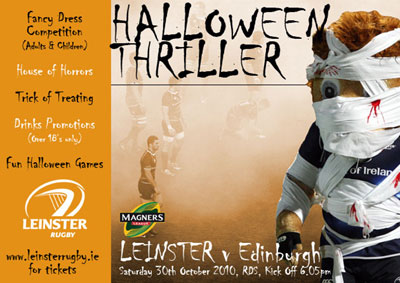 Leinster are set to take on Edinburgh in what promises to be a thriller, in the next Magners League home match in the RDS this Saturday, October 30th (KO: 6.05pm)…

The night will feature a fancy dress competition sponsored by Magners League (over 18s only) with a cash prize of €;500.

To enter, drop by the judging area on the sand arena behind the Anglesea Stand between 5.15pm and 5.45pm and then keep an eye on the big screen at half time when the Magners League Best Fancy Dress will be revealed!

There will also be a very special Halloween Face in the Crowd sponsored by Magners League at half-time, where you could win a Magners League goodie bag, if you are picked out by our camera!

Meanwhile there will be separate fancy dress competitions for children, sponsored by Spin 103.8, and families sponsored by Wagamama. Entry for these is at the Sand Arena.

The Spinnies will also be on hand with Halloween games at the Sand arena, while if you are brave enough visit our House of Horrors, located as last year, in the judges and stewards Pavilion behind the Anglesea Stand, next to Gate D.

Before kick-off, the Spin 103.8 dancers will be on hand to entertain the crowd so get to your seats early, while half time will see Magners League face in the crowd where you could win a goodie bag courtesy of Magners League.

One lucky supporter will also win a return flight for two from Dublin to London courtesy of match sponsors Cityjet.

There are also other surprises in store on so be prepared to be scared!

Tickets are on sale now from all Ticketmaster outlets nationwide, Spar (Donnybrook) and Leinster Rugby Store (Donnybrook) and ONLINE. They will also be available at the ground from box offices on Anglesea Road (opposite the Herbert Park Hotel) and Simmonscourt Road.