Tigers make their way into heart of Tullamore 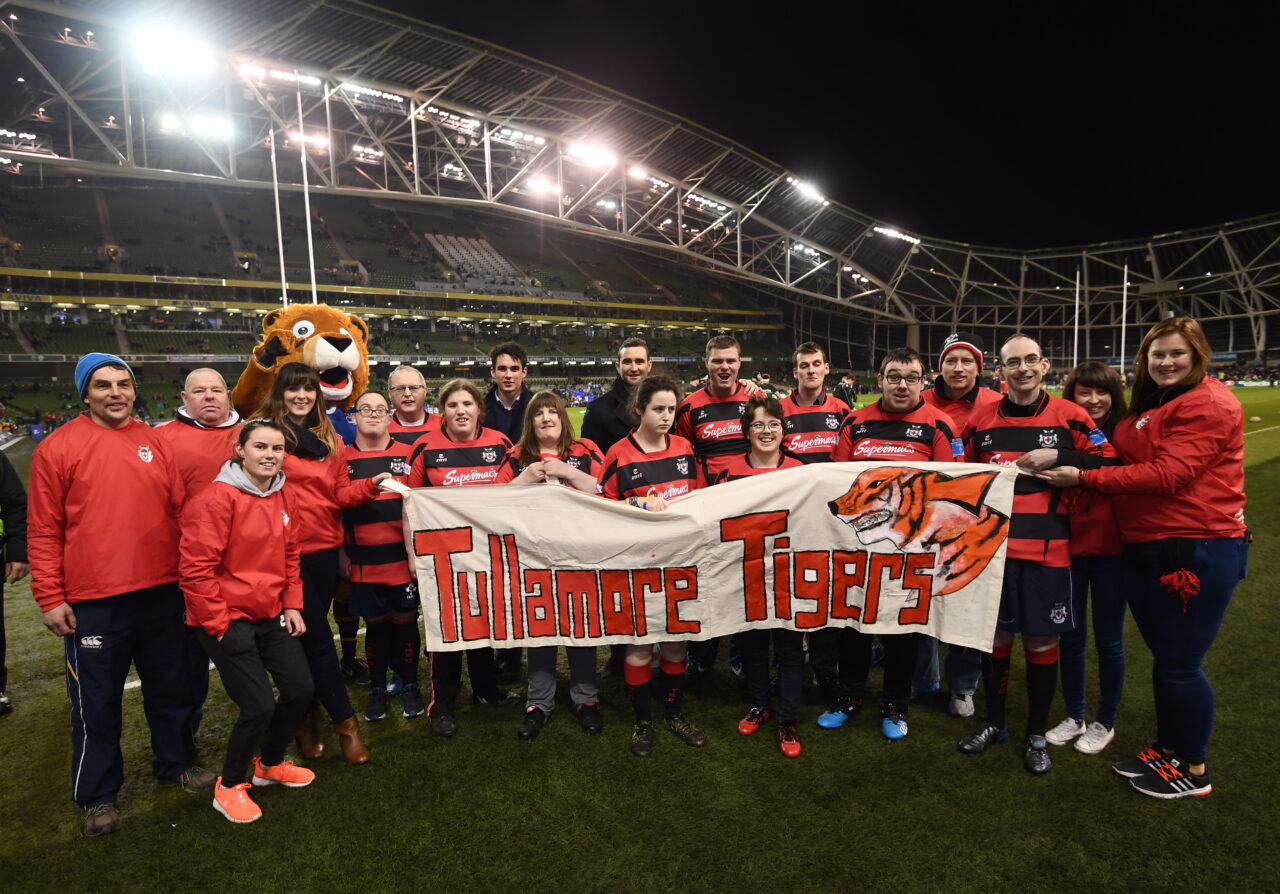 A whirlwind six months culminated with Tullamore Rugby Club hiring a train to take many of their members to Aviva Stadium in December 2016.

There was a whole carriage reserved for the team that prompted the mass movement from the midlands town – the Tigers.

Leinster were all set for the hosting of Northampton Saints in the Champions Cup and the club’s disability squad was invited to show what they could do in an exhibition match at half-time.

“Once word got around, we ended up hiring a train from Iarnród Éireann to take 550 people from Tullamore,” said Paul Cronin, who has been coaching along with John Burns.

“It was a day that will live long in the memory for the excitement and fun that we had and none of it would have been possible without the Tigers.

“We basically took over a whole corner at the Lansdowne station end around the corner flag. The group included everyone from our U-6s right up to senior players, parents, grandparents, everybody.

“The best thing about it was that we were all there to see and support the Tigers. It gave everyone great joy. It was an incredible day out.” 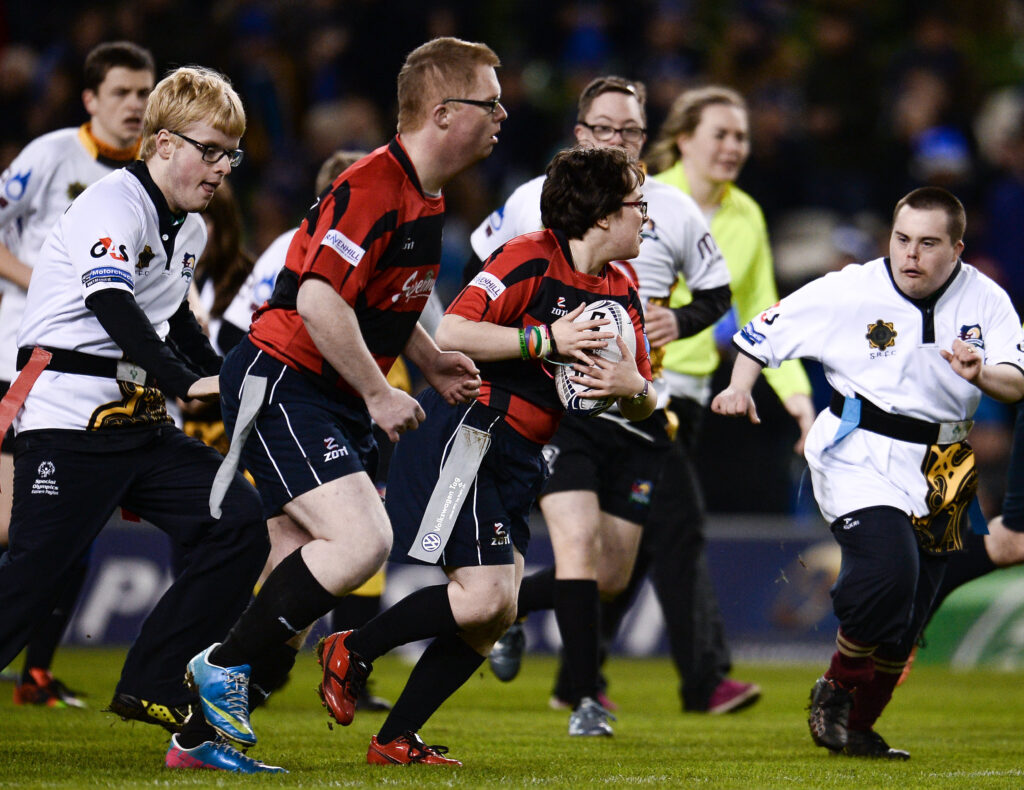 Just to think, this other arm of the club to go alongside the men, women, minis and youths teams had been created earlier that summer when disability pioneer Martin Nunan had shared the benefits bestowed on Mullingar for assembling the Lions, their inclusive squad.

“We used to hold Tag competitions during the summer. I was refereeing,” said Cronin.

“We were just up there one night. Martin came up to tell us, ‘I’ve got an idea that has worked in Mullingar.’”

There ensued discussions with several organisations in the town and surrounding catchment area, including Rehab Care Ireland, the Irish Wheelchair Association and outreach support units.

Cronin was just the man for the job as he has a career background in psychiatric and learning disabilities and Burns is a long-time coach at the club.

They quickly became the driving force behind the Tigers.

“The club came to me partly as a coach and partly as someone who understands the conditions people bring to the Tigers. Johnny (Burns) is a main coach in the club and my son, Garreth, came up to give us a hand, loved it and has stayed on with us.”

Cronin could not have foreseen the positive influence the Tigers would have on the overall atmosphere at the club as the mixed-ability playing membership grew from 15 players to 41, finding a way into the hearts of those there already.

“They have done so much to bring everyone in the club closer together,” he stated.

“There was an issue for us when we first started in terms of what part the Tigers would play in the club. We quickly realised they had to be at the heart of it, not just an add-on. We knew they had to be fully integrated. 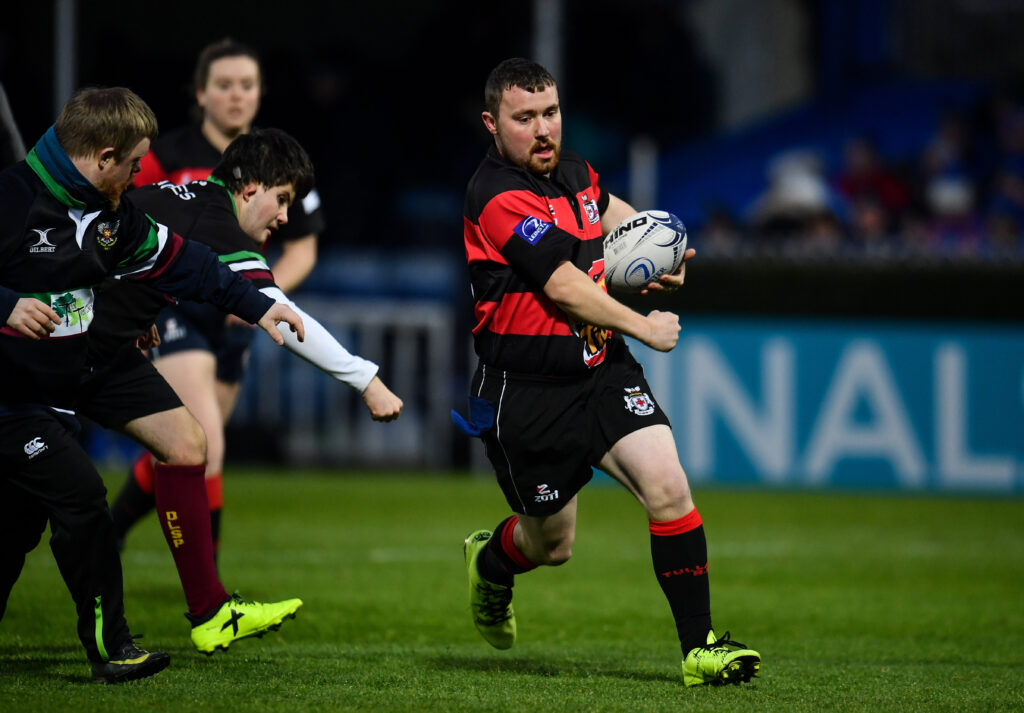 “We have had six of our own players go on and do coaching courses and it is noticeable how people come up to watch the Tigers play.

“We have had people asking, ‘what do we, the volunteers, get out of it?’ My simple answer is that they run out onto the pitch and play the game. What more do you want from it? They love it and it shows. That is all the reward you need.”

The coming of Covid ruined the summer season just gone by. It has only served to further fuel the players’ passion for the game.

“Normally, we have our own Tag Summer League. For the first three years, until this year, they played in it in their own right and mixed in with other teams.

“They love the social side of it as well. It is now an integral part of the club. They are treated the same as everyone else and that is the way it should be.

“Last year, at our awards night, we had a full formal dinner for the players and their families in November when the Disability season ends. First team players from the men and women also gave up time to come in and serve up the dinners, even staying on for the disco as we made general fools of ourselves,” he laughed.

Cronin was committed to setting up a junior section when that dastardly Covid struck. The roll out of the vaccine has enabled the club to look forward to what will be.

“They all miss it so much. We have our WhatsApp group and they are constantly on it asking, ‘when are we back training?’

The Tigers wouldn’t be possible without the buy-in of so many club members and senior player Róisín Kane is another who has given her free time. 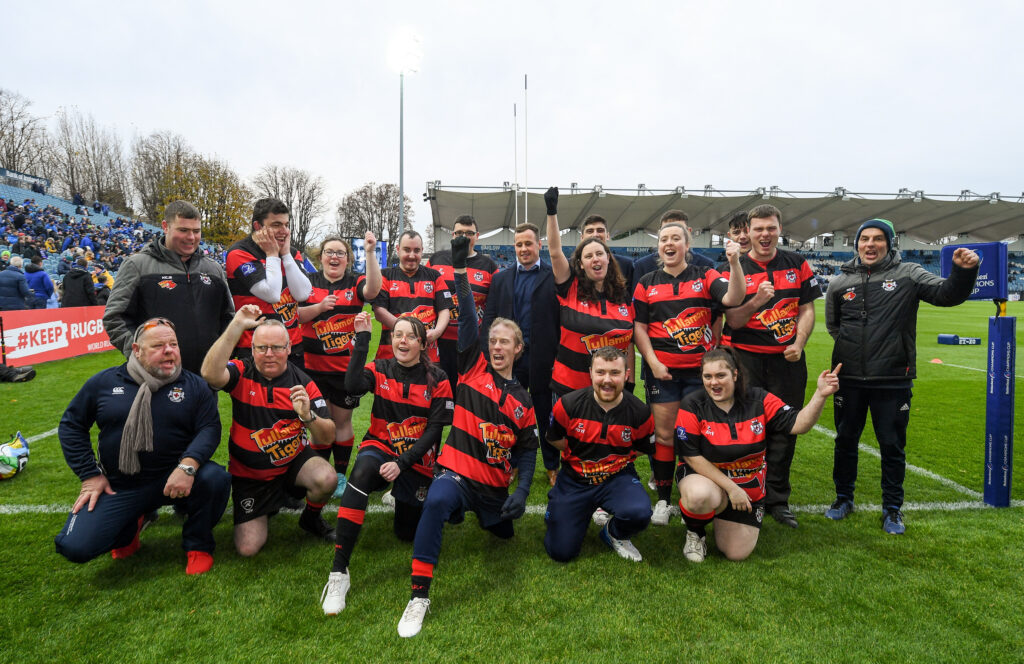 “I became very friendly with Paul and he became a big asset in the club. I found myself saying ‘yes’ almost before I was asked. It was just something I was keen on getting involved in.

“I suppose the lads had most of the work done and I was only coming in to give a hand at training,” she said.

“Basically, we had our IRFU Tag Rugby Leagues and we entered the Tigers as a team where they would play against the players at the club every Thursday.

“Everyone supported them and stood around watching them play. It became a thing where players wanted to play against them because it was so personally rewarding, sharing in the experience.”

In October 2016, Tullamore hosted their first Disability Tag Rugby Blitz tournament at their grounds in Spollanstown for two teams from Mullingar and one each from Barnhall, DLSP, Galwegians and Greystones.

“To see how much it has grown is huge. When we set out to hold our own tournament in Tullamore, we had seven disability teams come to the club.

“The transformation in the players from when we started out to now has been incredible. They have gone from being shy and not knowing what was going on to see them almost going into character when the boots went on.”

This has led to two exhibition matches at the RDS, two in Energia Park and that unforgettable day at the Aviva.

The Tigers have played in over 20 tournaments and over 90 games, held two further home Blitz competitions and been given amazing help and support by the people and businesses of Tullamore.

In 2018, Paul and Johnny were joined on the coaching side by Paul’s son Garreth as the fitness and game coach. They have attracted a lot of new players and are currently looking into playing two teams on a regular basis in 2021.

“They developed so much, so quickly as individuals and as a team. The support of the parents and even people from the club is something special to see,” stated Kane.

That day in the Aviva in 2016 was an occasion that sealed the Tigers’ fate as an arm of the club which no one could let go.