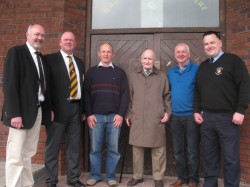 Tom O’Brien, who died this week in Carlow was a major figure in Leinster Rugby for decades and made enormous contributions to Co Carlow and Bective Rangers Football Clubs.

Tom was capped by Leinster in the 40’s and 50’s and played in a final trial for Irish selection.
After helping to transform Bective Rangers into a cup winning side in 1955 and 1956 he transferred to his local Co Carlow Football Club in 1957 (aged 30). As a former Leinster senior player his influence on and off the field in Carlow rugby was huge. In his first season with the Club he led Carlow to its first Towns Cup victory in 24 years.

For the next four decades or so, Tom was central to the heartbeat and development of rugby in Carlow.

He led the project to purchase the 14 acre Oakpark site from the Land Commission in the 1960s and then found ways to finance the project. He helped source a temporary Church building for use as a club pavilion. He helped source the Pavilion from Balldoyle Racecourse for use as the Carlow changing rooms. This is still in use today.

In all Club matters Tom was a natural leader and facilitator. The example he set encouraged others to follow.

Without him Carlow would be a much lesser club today.