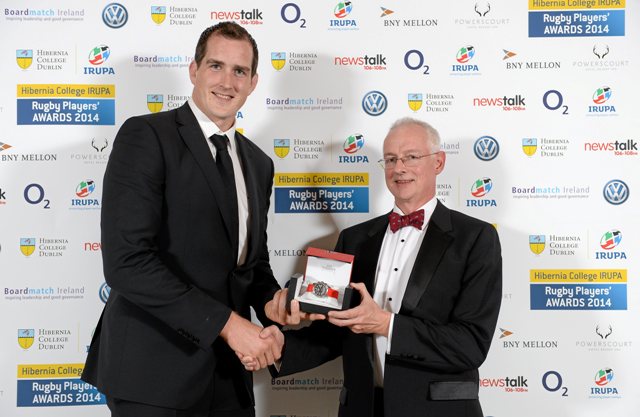 There were wins for Devin Toner, Rob Kearney and Shane Jennings at the 2014 IRUPA Awards…

Devin Toner was presented with the Newstalk106-108fm Supporters Player of the Year as chosen by listeners of Off the Ball at Wednesday night’s IRUPA Awards.

The VW Try of the Year went to Rob Kearney for his intercept try against New Zealand during Ireland’s heartbreaking defeat to the Rugby Championship holders in the Autumn International Series.

Shane Jennings was awarded the Hibernia College Medal for Excellence, which rewards on field effort combined with off field commitment to the game. Nominees were voted by their peers but were also judged on their contribution to the sport through community involvement, education, work and charitable initiatives.

Ulster and Ireland winger Andrew Trimble was last night voted the Hibernia College IRUPA Players’ Player of the Year 2014 by his fellow players at the 12th annual awards ceremony.  Andrew has had stand out season for both Ireland and Ulster.  He started all of Ireland’s 6 Nations games, scoring three tries along the way.  The prestigious award counts as Andrew’s third IRUPA Award overall, winning the Young Player of the Year in 2006 and Try of the Year in 2010.  The Award comes only days after Trimble was recognised as the Ulster Player of the Year.

Connacht and Ireland’s Robbie Henshaw was awarded the Nevin Spence Young Player 2014 for the second year in succession, winning ahead of Jack McGrath and Jordi Murphy, and marking the first time a player has won back to back awards in any category in the 12 year history of the awards.

Joining Ireland’s heroes in the BNY Mellon IRUPA Hall of Fame was Ulster and Ireland prop Simon Best.  Munster’s James Coughlan collected the O2 Unsung Hero Award, voted for by the public on the O2 Ireland Facebook and Twitter accounts.

Three new awards were presented this year; the Boardmatch Contribution to Society, was presented to Donnacha O’Callaghan in recognition of the significant impact made to society through his work with Unicef.  The inaugural BNY Mellon Women’s Sevens Player of the Year 2014 as voted by members of the Sevens squad was presented to Nicole Cronin for her consistent performances during the qualification tournaments for the Olympic Games in Rio in 2016.  In a season of standout performances and memories, members of the public voted Ireland’s 6 Nations title win as the Powerscourt Hotel Rugby Moment of the Year via Twitter.  The award was collected by Gordon D’Arcy and Ireland team Manager, Michael Kearney.