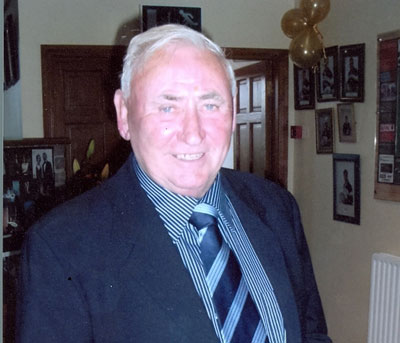 Early last year Arklow Rugby Club lost one of its most loyal servants, when former bar secretary Tony Cullen past away…

The genuine sorrow that was expressed by both former and current players and club officials came as no surprise. Tony was a gentleman that took pride in all he did and constantly obliged all requests from those in club, no matter how big or small.

Some people help build and shape companies, countries, and empires. But others are more practical and have a more local profile, but have a disproportionate influence on the lives of others, which may not be ever recorded in the day to day history of his time. Tony Cullen was such a man and a proud member of Arklow Rugby Club.

Just as the seventies were starting Tony began a long association with Arklow Rugby Club that was to include all of his family over the years. He first made ready the newly acquired pitch by use of his knowledge of removing large rock formations from all over the playing pitch. He was not a player, but this was about the only part of the club that he did not perform. He was our building consultant and our quantity surveyor and when the first building was ever erected in Ballyrichard beside his home he took responsibility for all aspects of the club, plus grounds. He spent endless hours keeping the club in such good condition and would never allow the club to be presented in a poor light.

He was a fellow traveller whenever the Arklow club represented Ireland abroad and was always among the reception committee when we received visiting teams to Arklow.

Tirelessly he would be at the club till all hours, ensuring that every aspect of the club was up to his exacting high standard, and was more like a home than a club. The years did not slow him down and he remained our confidante and friend throughout the growing years of the club. His keen sense of fair play and his devotion to the rugby club are there for the present generation to see and enjoy. A rugby club is only pitches and buildings what makes it an enjoyable place is the people that populate these buildings and the pitches.

Whilst he was never a player his achievements for the club surpass many others that graced the rugby pitch. All clubs, now more than ever, require voluntary help from its members. Men such as Tony are a rarity. Not just for their work endeavours but for their contribution to the camaraderie in the bar. In Tony’s case, as bar secretary this was either on training nights, when his presence could make a horrible November night seem tolerable or on match days, when he would make the victories feel that bit more sweeter.

Impressions made by people last a life time, and Tony’s memory will forever be there, in the club house and within the members of Arklow Rugby Club. Those who knew him and his family were indeed blessed.

“I’m closing the bar now lads if you want to get your last round.”

Thanks for the memories Tony.