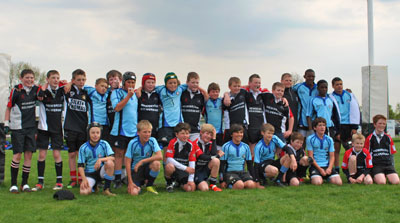 Fresh from a momentous trip the previous day to watch Leinster triumph in the Heineken Cup semi-final, the touring party – 24 players and over a dozen mentors – journeyed to the Curragh-based club to participate in a three team event alongside Cill Dara RFC and their near neighbours, Naas RFC.

The games were played at Under-11 and Under-12 level and the children put on a wonderful show of exciting and committed rugby, no doubt taking inspiration from what they witnessed at the Aviva.

After the matches had finished, gifts of plaques, jerseys and signed rugby balls were exchanged between representatives of the three clubs. More importantly, new friendships were formed among the children with a love of rugby as the common bond.