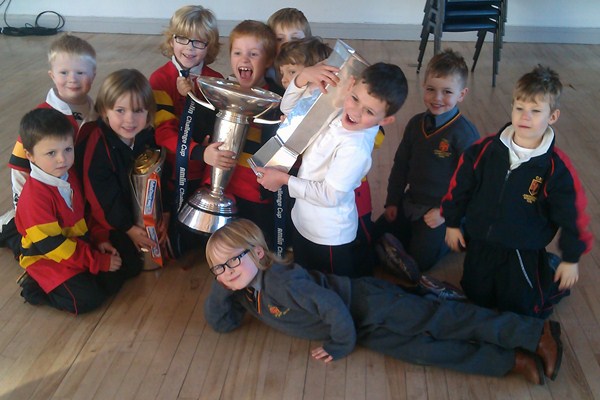 The Leinster Rugby Treble Trophy Tour, sponsored by Bank of Ireland, is coming to a school near you over the coming weeks and months…

The tour gives primary and secondary students across the province the chance to interact with the Amlin Challenge Cup, the RaboDirect PRO12 trophy and the British & Irish Cup.

This past week started off in Palmerstown when the tour stopped off in The King’s Hospital. This was followed later in the day with trips to Presentation College, Terenure and The High School, Rathgar and Castleknock College. The following day two primary schools in Dublin were visited. Dominican Convent, Dun laoghair

e and Glenageary/Killiney National School students were next to have the opportunity the get their hands on the trophies.
It was here that the tour waved goodbye to Dublin for the time being and heading for Arklow, Co Wicklow. There was time to stop off en route to the boys at Presentation College, Bray. As part of the interactive tour, all students at each visit are given the opportunity grill the Leinster Rugby representative at each visit during a Questions and Answers session about all things Leinster.

The final day of the tour this week brought us to Gaelscoil an Inbhir Mhóir, St Joseph’s Templerainey, St Peter’s Boys National School Arklow and St Mary’s Barndarrig. It was great for us to see schools and students decked out in their Leinster Blue and to see how well the team is followed throughout the 12 counties. A special thank you has to go out to the teachers of Gaelscoil an Inbhir Mhóir. We were given an outstanding reception and treated to fantastic performances by singers and céili dancers.

Schools in the Mullingar and New Ross areas will be visited next so keep an eye out for the Treble Trophy Tour posters in your local school!

Keep up to date on exclusive news and photos from the tour by following Leinster Trophy Tour on Facebook and @LeinsterTrophyT on Twitter.

Those interested in turning their school Leinster Blue and receiving a visit from the Treble Trophy Tour should email trophy@leinsterrugby.ie.