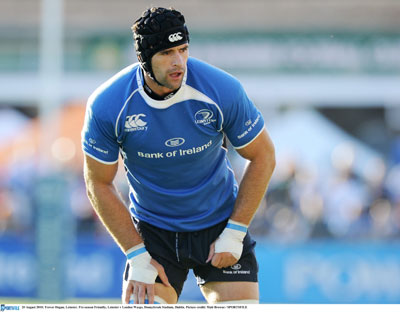 He represented Munster on 57 occasions (scoring one try) before moving to Leinster in the summer of 2006 and was an influential performer in the province’s Magners League (2007/08) and Heineken Cup (2008/09) successes.

In all he made 59 Leinster appearances (scoring three tries), though injury curtailed his involvement this season to one game against the Dragons in November, which proved to be his final professional outing.

Trevor Hogan said: “It’s been a tough battle over the last couple of seasons with my injury but after my last game (against the Dragons in November) the problem worsened to the point where I couldn’t continue.

“It is never an easy thing to accept but I’m thankful for all the support from my teammates and the medical, management and coaching staff at Leinster, as well as Dr. Ray Moran who has helped me greatly over the past few years.

“It was an honour to play for Leinster over the last number of years and I would like to thank all the supporters for their backing over my career.”

Leinster Chief Executive Mick Dawson added: “It is always a sad day when professional players call a premature end to their careers, but Trevor can reflect on a successful career in the blue of Leinster, red of Munster and green of Ireland with real pride.

“Trevor was a mainstay of the Leinster pack but his recent involvement was curtailed due to injury. Even in adversity he displayed great courage and mental strength to recover from several setbacks to force his way back into the team.

“A committed, intelligent performer, Trevor played an important role in the province’s recent success and he has made a telling contribution to the game of rugby in Ireland. We wish him and his family well as he begins a new chapter in his life and would like to thank him for all his efforts over the last few years.”