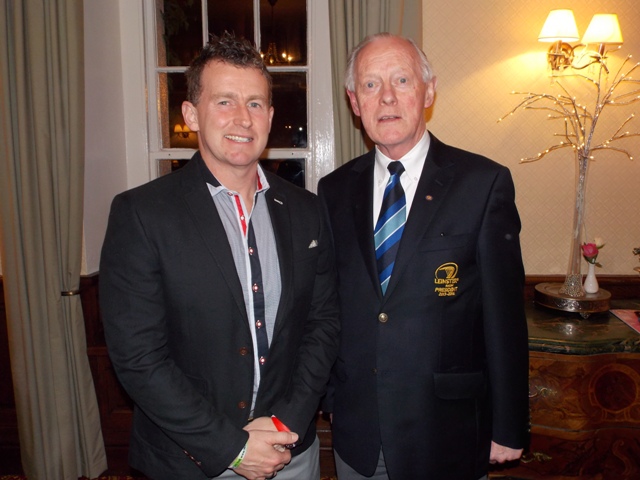 One of the World’s Top Sports Referee’s and one of Rugby’s favourite sons Mr. Nigel Owens gave an insight into his 20 year Rugby Career were he refereed some of the greatest matches around the world and also some of the highs and lows of his fascinating personal and professional life.

To say the man is a true legend of the game is an understatement and this was evident last night as over 500 people laughed, cheered and clapped through a truly inspirational night in Celbridge.

This Night would never have been possible without the massive amount of work that the NUIM Barnhall RFC Mini Parents and committee put in the last few months and with special thanks to Tom Colton, Declan Counihan and Michael Waldron for putting a great night together.

Along with the money raised for the NUIM Barnhall U12’s Tour at the end of the season they also managed to raise some much needed money for Cheeverstown who help give respite and day services for over 400 Special needs Children around Dublin and the Money raised last night will allow 5 very special Kids from Cheeverstown to travel to the Rugby World Cup.

Last night in Celbridge had a real international feel with People from Wales, England, Scotland, New Zealand and South Africa attending and all Rugby Fans true and true. We had dignitaries from a lot of Clubs in Leinster like Coolmine RFC, St. Mary’s College RFC and Also Our Own Leinster Rugby President Mr. Paul Deering enjoyed the night.

Nigel also informed us last night that he will visit Parsonstown on Sunday morning to meet some of own youths and Mini’s before their matches and well as get a tour of the club and the new Changing rooms.
If you were not one of the lucky ones in attendance last night, you should grab a copy of his book “Half Time” which is sold in all good book shops.

We hope to see you on Sunday in Parsonstown around 11am and maybe you’ll get to see the great man in action on the pitch after he Ref’s the Ireland V Italy Match in Dublin on Saturday.

FEEL THE PRIDE, THE PASSION, THE BLUE