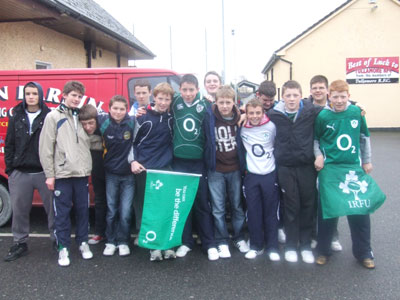 Five buses left Spollenstown in convoy at 11.30am.

What started as an idea to sell some of the clubs allocation of tickets for the Samoa game snowballed due to the extremely good value of €;25 per ticket, including the bus and the novelty of visiting the brilliant new home of Irish rugby.

The club was so overwhelmed with the demand that they had to source tickets from other clubs to meet the excess applications received. In the end everybody who applied was looked after.

Tullamore U-17 team went one better and organised a game in Dublin against Guinness before heading to Lansdowne Road.The reports back were that everybody had a great day and thought that the stadium was terrific.

Tullamore are grateful for the support of the I.R.F.U. with their financing of the cost of the buses.

Due to demand the club are repeating the offer for the Argentina game on Sunday and are confident of selling their full allocation of tickets. Tom Moloney can then take a breather from his role as International Tickets Secretary until the 6 Nations!