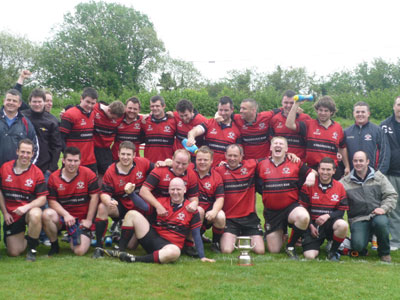 Is this a record? For good measure Tullamore Youths reached two Leinster Finals.

Unfortunately the 1st team lost the Newstalk Provincial Towns Cup to Dundalk and have now lost three finals in a row. This is not a record but does equal the bad luck of Athy who lost three in a row in the 1920’s.

The 4ths, under the leadership of Coach Pat Tierney, won their final against New Ross 3rds in the Dunne Provincial Fourths Cup on a scoreline of 33-29 played in Carlow.

It was then the turn of the 3rds who were convincing winners over Naas 27-3 in the Anderson Provincial Thirds Cup in Portlaoise. Nigel Ravenhill, aged 43 captained the side that played all season and this stood to them in the Cup.

Finally the 2nds were beaten by North Meath 10-7 in Ashbourne on the last day of the season in the Leinster Provincial Towns Seconds Cup. Tullamore were the holders of the trophy and meet a more determined side who had won the 3rds Cup the previous season.

One of the main reasons that Tullamore could field four good cup sides was having an U-21s in the early part of the season. These players integrated into the four sides and were a breath of fresh air for cup time.

To keep the club even busier the Youths were also successfull. The U-16s Schools/Youths side won their Cup by beating a strong Navan side 25-05 in the final.

The Under-17 team were beaten in the final of the Plate by a Gorey side that had won the Leinster U-17 Premier League.

Played six finals and won three. Cannot complain about that.