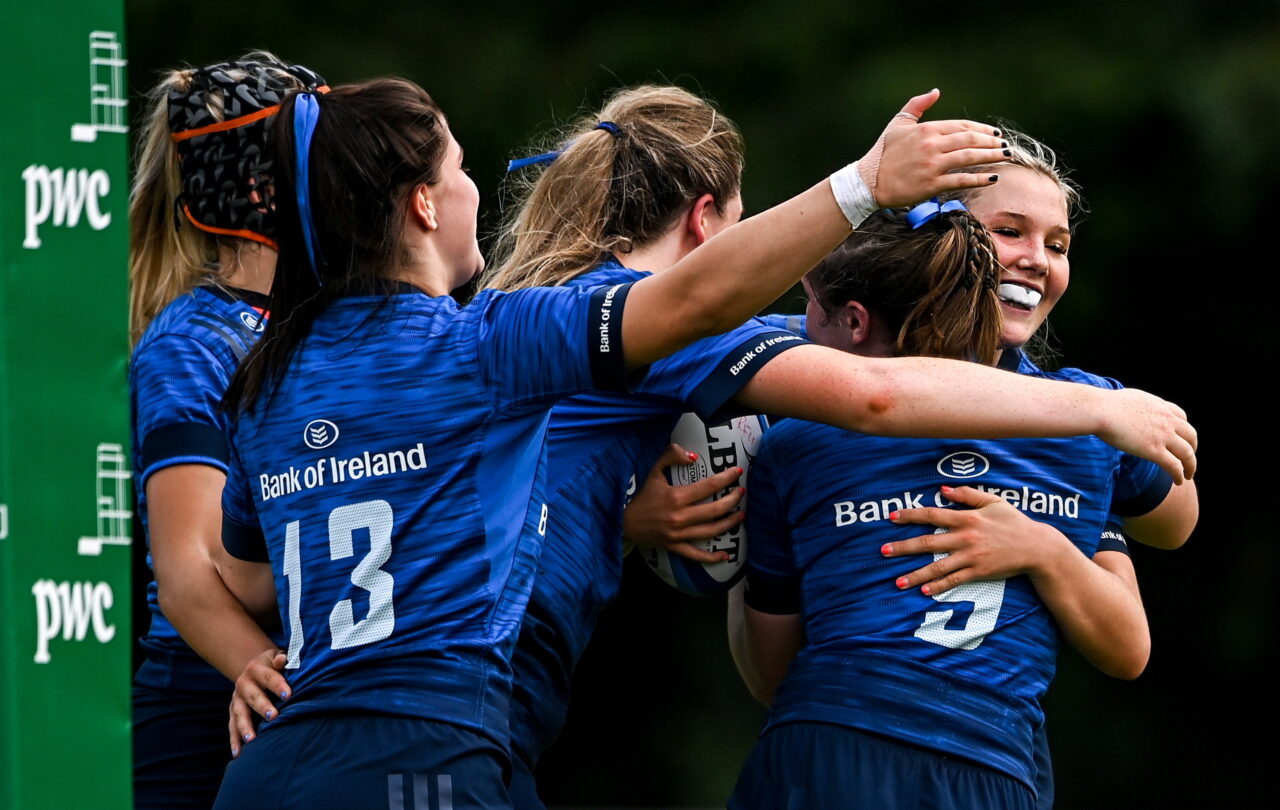 Wings Alanna Fitzpatrick and Emma Tilly shared four of the eight tries in a reflection of how Leinster Rugby U-18 Women used width to overwhelm Ulster in the U-18 Women’s Interprovincial Championship on a hot, humid Sunday afternoon at Templeville Road.

The conditions encouraged expansive play and Leinster looked to whip it wide, while Ulster patiently probed the channels closer to the ruck.

Early on, the home side set up camp inside Ulster’s half, but struggled to break into the 22.

Captain Aoife Wafer’s sidestep looked to have opened the door until Ulster’s aggressive defence, led by Jenni Collins and Moya Hill, came up hard to force a spill. 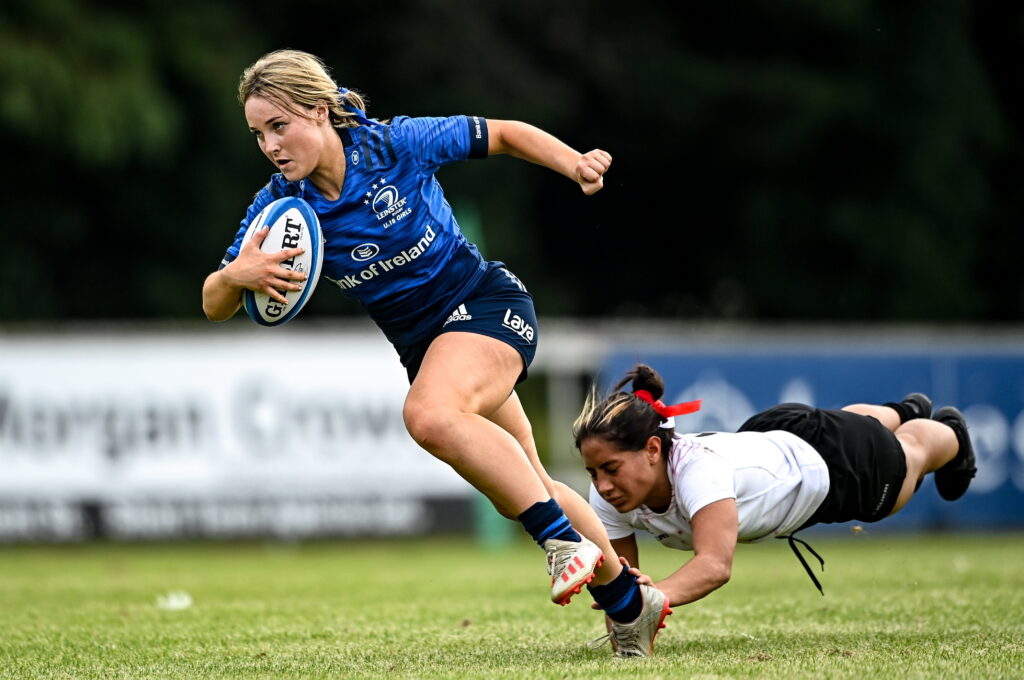 The breakthrough came in the 12th minute. It was well worth the wait as centre Aoife Dalton took an outside arc and No 8 Erin King was on her shoulder to take the ball home.

Straight after the water break, Leinster re-established position to force a five-metre scrum when Ulster out-half Farrah Cartin-McCloskey had to touch the ball down behind her line.

The Leinster scrum was solid and scrum half Katie Whelan took a half-gap for the second try, Dannah O’Brien striking the conversion sweetly from the left for 14-0 in the 19th minute.

The tactical kicking of O’Brien was achieving the double goals of gaining territory and giving the chasers every chance to win the ball back, Cartin-McCloskey doing well on more than one occasion to defuse dangerous situations.

The visitors were unable to hold their position, despite the hard-driving of locks Cara O’Kane and Jorja Battishill, when they could get it and Tilly almost got away on the counter.

This time, Whelan seized on a loose ball in midfield and managed to get the ball away smoothly enough for right-wing Fitzpatrick to burn the defence for the third try, O’Brien converting, in the 27th minute.

Ulster were in a bind. They were tempted to move the ball earlier in defence, bringing with it the dangers of what can happen so close to home. 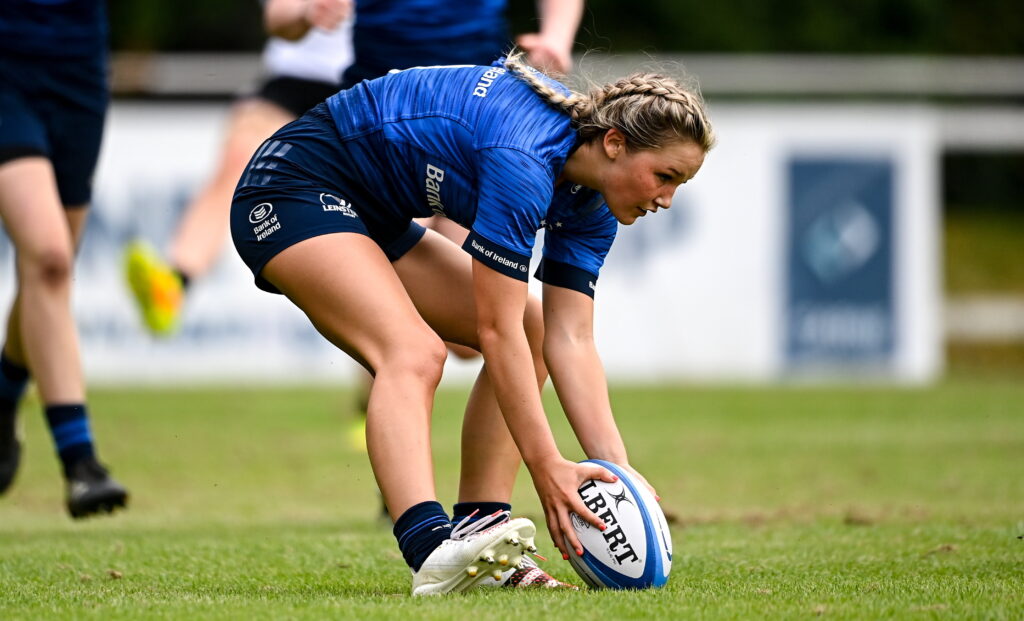 Captain Wafer was alert to the opportunity for an interception, snapping up the fourth converted try for 28-0 on half-time.

The northern province did move with menace, centre Lucy Thompson called back for a forward pass when she was making ground.

However, the flow to Leinster’s game did not take long to pop again, the ball moving at speed through many hands for Tilly to make light work of the cover in the 40th minute.

Ulster half-backs Sarah Shrestha and Cartin-McCloskey were everywhere in defence and centre Thompson looked a threat without ever having the platform to thrive.

Flanker Sadhbh McGrath had to be quick to react to O’Brien’s grubber as Fitzpatrick closed in.

By this stage, it was no secret Leinster were looking to feed their wings. Fitzpatrick skated over on the right for replacement Abby Moyles to convert for 40-0 in the 55th minute.

It was merely a temporary solution as Tilly took advantage on the right for her second and Dalton made her way home from 70 metres, both converted by Moyles.