UCD celebrate Team of the Century… 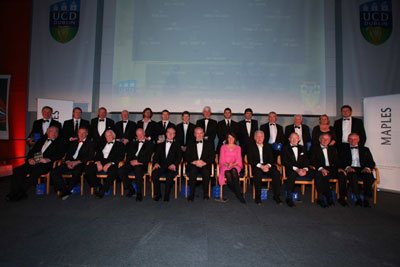 As part of the Club’s Centenary celebrations, University College Dublin RFC selected a Team of the Century from players who have worn the St Patrick’s blue down through the decades…

In all 222 players were nominated covering every era since 1910. The selectors were Edmund Van Esbeck and Jim Glennon, both experienced rugby people from outside the Club.

The 15 starters and 7 substitutes were announced at the Club’s Centenary Dinner last Friday, 25th March. The dinner, which took place in the O’Reilly Hall, Belfield was attended by 616 Club members and friends.