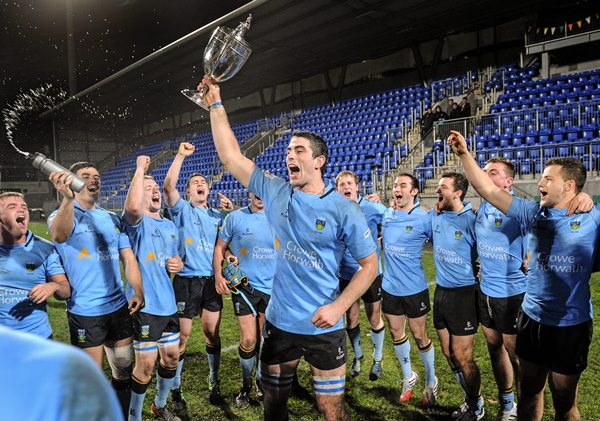 It was an agonising defeat in the end for Terenure, as UCD held on to their lead to take the Leinster Senior League Cup back to Belfield…

The students took the lead midway through the second half, and despite a late score, Terenure couldn’t find enough points to reel them in. It was a thrilling game, with both sides looking to play rugby the way it should be played, with two brutal packs feeding backlines who just wanted the ball in hand and a chance to take on their opponents. Played in great spirit, this final was a fitting end to the competition – even if the result was the wrong one for those of a Nure persuasion.

UCD started like they’d been shot from a cannon, with outhalf James Thornton spraying the ball wide for the UCD back three to cut Terenure open, but their only reward from the opening salvos was a couple of missed penalties, and Terenure grew in stature from then on. Pressure at scrum time led to a penalty for the Division 1B leaders, and Mark O’Neill made no mistake to give Nure a 3-0 lead.

Thornton responded in kind to draw UCD level, before a set-piece move put John Bollard away in midfield for Terenure. A couple of phases later the ball was hacked over the UCD line and second row Kev O’Dwyer was on hand to dot down. O’Neill added the extras to give Nure a 10-3 lead, and a soon added a penalty to give Terenure a 13-3 lead at half time.

A great start for sure, but UCD had showed flashes of brilliance out wide, and Terenure had struggled to get to grips with referee Alain Rolland’s interpretation of the breakdown, so this game was far from over. The Nure defence held strong for the early parts of the second half, with UCD’s handling continuing to shackle their attacking efforts, but pressure told eventually and Thornton knocked over a penalty to make it 13-6.

However, a turnover in midfield gave the UCD backline all the opportunity they needed, with Leinster Academy fullback Andy Boyle showing seering pace to score under the posts and draw the sides level at 13-13. There followed a sustained period of UCD pressure, including another missed penalty, before Barry Daly was put away for the students. Sub Niall Earls converted to leave it 20-13.

The pace of the game started to show for Terenure, with several players looking out on their feet, but coach James Blaney used the bench wisely, with each sub making a huge impact when introduced. Brian Moroney in particular looked like a man on a mission, skittling several would-be UCD tacklers – we’ll say nothing about his ‘unconventional’ warm up!

Earls tacked on another penalty to leave Nure 10 points down, but there was no question of heads dropping, with skipper James O’Neill leading the fightback. Wing Conor Kelly showed great instincts late on to pinch a pass and score in the corner, but despite their best efforts, Terenure couldn’t find the equalising score. UCD were worthy winners, but the narrow margin of victory tells all.

Congratulations to UCD, and to all in the Leinster Branch for organising the competition and final superbly. Clubs remain the beating heart of Irish rugby, and this game showcased the very best they have to offer. A tantalising glimpse of what the rest of the season has to offer. Check out the exclusive photos from the match here.

The celebrations are only getting started for UCD https://t.co/dHl4c1F1XQ