UCD gear up for Centenary Challenge… 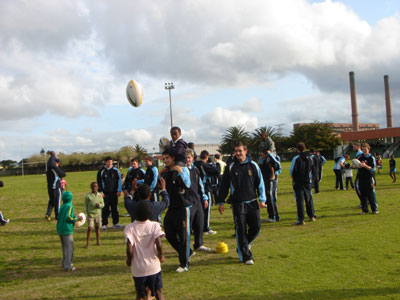 UCD kicked off their centenary year with a two match pre-season tour of South Africa and the team had a training camp and played matches against Western Cape University and False Bay Rugby Club. In addition, the team and coaching staff took time out to conduct a coaching session in the Langa Township in Cape Town for children from the local Busy Bees team.

The Centenary match, which sees UCD take on a team made up of the finest university players from UCC, Dublin University, Queens and NUI Galway promises spectators an entertaining evening of rugby as an open attacking style of play is central to the philosophy of university rugby.

In addition spectators will have a chance to be a part of the action and win €;25,000 by taking part in the Paddy Power Crossbar Challenge at half time. Six spectators will be chosen to take part and they can win the cash prize if they can hit the cross bar with a kick from the half way line.

This fixture is a fitting way for Collidge to celebrate its centenary as a similar fixture took place in 1960 to celebrate the club’s golden jubilee. On that occasion were amongst the players on show were future Ireland players Mick Doyle, Henry Wall and Bill Mulcahy of UCD and Tom Kiernan of UCC as well as current IRFU president Caleb Powell of Dublin University.

Entrance to the match is free for spectators with a student card.