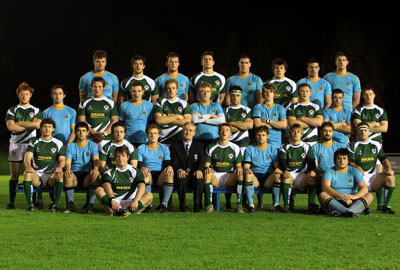 The match was preceded by a reception hosted by the president of UCD (also president of the rugby club) Dr. Hugh Brady at his residence, University Lodge.

Amongst the invited guests were Victor Turney (QUB, President IURU), John West and Trevor West (Dublin University), Len Harty (UCC) and Billy Glynn (Vice President IRFU) along with many club members both past and present including Ray McLoughlin, Bill Mulcahy and Niall Brophy.

The match itself was an entertaining, high scoring and frenetic affair with a strong Combined Universities XV coming out on top 41-23 in front of a large crowd. Unfortunately there was no winner of the Paddy Power crossbar challenge despite some tremendous efforts. After the match the club hosted a dinner for both teams in the university restaurant.

The club would like to thank all club members who helped organise Friday’s match, in particular Billy Murphy and Alan Bainbridge and are especially grateful to the Irish Universities Rugby Union and the players and coaches of the Combined Universities XV for helping them celebrate their centenary.