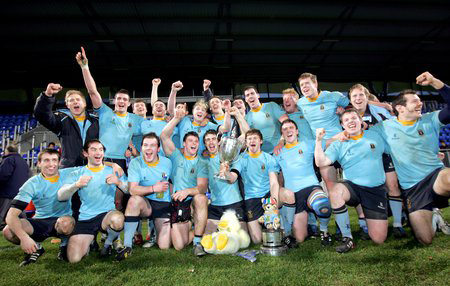 An injury time try from UCD lock Shane Grannell, coolly converted by out-half James Thornton, snatched the Leinster Senior League Cup for College for the first time since 1977 at Donnybrook…

St. Mary’s held the upper hand for all but the final quarter as their fullback Gavin Dunne kicked them into a 6-3 lead at the interval.

On resumption, St Mary’s kicked on into a 20-9 advantage from tries from wing Paul Gillespie and replacement Mark Donnellan, both converted by Dunne.

They looked decisive. But a flying finish from wing Tom Fletcher and Thornton’s accuracy from placed balls put College within a converted try of the lead.

Lock Grannell’s drive to the line enabled Thornton to kick the winning points.