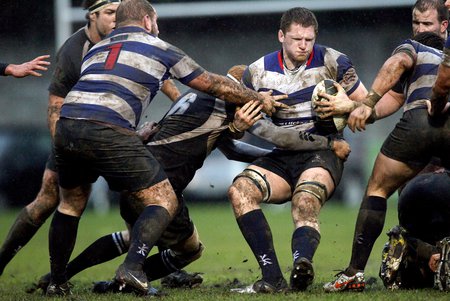 OLD BELVEDERE are back on top of Division 1A of the Ulster Bank League by virtue of a late Dave Mongan try, converted by skipper Andrew Dunne, in a 10-9 victory over Blackrock College at Anglesea Road on Saturday…

But, as their coach Phil Werahiko so readily admitted, they were blessed to take the four points. Bottom of the table Blackrock should, without question, have pulled off one of the shock results of the season.

Blackrock had seemed in complete disarray following a woeful performance against Dolphin the previous week and a major row within the club concerning the later starting time for Saturday’s match. Yet, they held the upper hand until those dramatic closing minutes.

Most importantly, Blackrock equipped themselves much better to the atrocious conditions. The game was a throwback to the seventies with players indistinguishable because of the muddy surface.

It didn’t make life easy for referee John Lacey, the teams, or the spectactors. But Blackrock weren’t at all bothered as they moved 9-3 clear by half time.

When centre Rob Keogh got an easy chance, just to the left of the posts, to kick his fourth penalty 12 minutes from time, the match seemed to be over. But, somehow, he missed.

After No 8 Leo Auva’a drove through off the back off a scrum, the ball was moved quickly for left-wing Mongan to show his finishing power, beating two men to cross to the left of the posts. Dunne calmly added the conversion to give Old Belvedere their one point victory.

“Blackrock played very well, and adapted to the conditions much better than us,” admitted Old Belvedere coach Werahiko.

“Had they gone 12-3 ahead with that last penalty, I could not have seen us coming back. We just needed one piece of quality rugby and, thankfully, managed to produce that with the late try.

“But we were very fortune. I feel sorry for their coach Andy Wood because Blackrock deserved more than what they got.”

Either way, Old Belvedere have won a match they could so easily have lost, while their two main rivals Cork Constitution and St Mary’s College both went down to surprise defeats. It leaves them in a great position to secure one of the three play-off spots.

But they will be hoping to play a lot better when they face the improving Young Munster outfit at home next weekend. Missing Simon Keogh, the moved Andy Dunne to scrum-half with Conal Keane starting at out-half.

But they just never functioned until those closing minutes, managing just one penalty from Keane. Blackrock, for their part, did everything right in the conditions, apart critically, from getting two players yellow carded and, of course, missing that penalty which would surely have brought them victory.

YOUNG MUNSTER’S surprise 6-3 victory over Cork Constitution at Tom Clifford Park has put them within range of a play-off spot.

Yet again, the boot of Alan Kingsley was decisive as he kicked two penalties, while Cork Con could only manage one from Gerry Hurley. Cork Con led 3-0 but had crucially had prop Stephen Archer sin-binned in the second half.

Kingsley subsequently landed the first of his penalties, and then kicked the winning points with five minutes remaining.

Over at Coonagh, Shannon got the better of third placed St Mary’s College 20-15. It was sweet revenge for their 53 point humiliation by the Dublin club earlier this season.

After conceding an early Ciaran Ruddock try, Shannon got on top. They had tries from Luke O’Dea and David Quinn, the rest of the points coming from the boot of Garreth Quinn McDonagh.

Dolphin comfortably saw off Garryowen 14-3 at Musgrave Park with Barry Keeshan contributing two drop goals and a penalty. The only try came from centre Harry Fleming.

Buccaneers won the top of the table clash against Clontarf in Division 1B at Dubarry Park. The sides were level at 6-6 when Calum Boland gathered a cross kick from Jack Carty in the final minute to score the match-winning try.

Earlier, Adam Kennedy had landed two penalties for Buccaneers with Noel Reid kicking two for Clontarf. Buccaneers remain two points behind Clontarf but have a game in hand.

Lansdowne hold on to third spot on points difference, despite losing their sixth game in nine matches. They went down to their first home defeat 17-13 to UL Bohemians on the back pitch at the Aviva Stadium.

UL Bohs are now on the same mark as them, along with Bruff. The Limerick outfit returned to winning form by beating UCC 10-0 at Killballyowen Park, with full-back Brendan Deady scoring the only try.

In the remaining game, Dungannon produced a late surge to beat Galwegians 21-15 at Stevenson Park. Ronan Loughney and Chris Cochrane crossed for their tries.