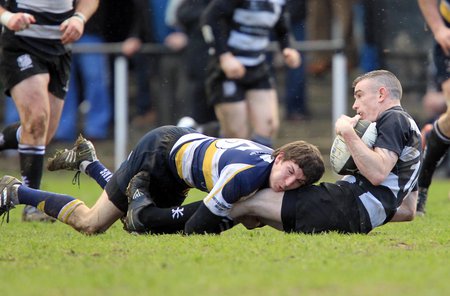 Not only did this deserved victory assure them of promotion but it also means that they are virtually certain of a place in the Ulster Bank League semi-finals, alongside the three Division 1A qualifiers. Only a complete collapse in the final two games, and Buccaneers picking up close to maximum points from their last three outings, will deny Clontarf a play-off spot.

It’s not going to happen. Clontarf, now 12 points clear at the top of the table, are deservedly heading for the semi-finals were they are quite capable of giving a good account of themselves against any of the Division 1A qualifiers.

Understandably, their Director of Rugby Bernard Jackman is reluctant to get ahead of himself but he does admit that the signs are good. He said: “It would be great to combine promotion with a place in the play-offs.

“I believe that, with the quality of players we have, we should be a Division 1A side. And, assuming that we do make it into the semi-finals, we will look forward to the challenge.

“Obviously, we will be outsiders but Old Belvedere came out of Division 1B last season and very nearly beat St Mary’s. On that basis, you would have to say that we have a chance.”

Clontarf are a much stonger outfit than the side which was relegated from Division 1A last season. They have brought in a number of experienced performers, and some their younger players has come through.

It’s a combination which has seen them lose just two games in their current campaign. Importantly, they have developted the habit of winning tight games, something they repeatedly failed to do when relegated from Division 1A.

This was a match they could quite easily have lost. Down to 14 men following the sin-binning of Martin Garvey five minutes from the end of normal time, and leading 20-16, they were forced to defend desperately.

But they held out and subsequently made certain of victory with a penalty from substitute Martin Dufficy. From Lansdowne’s point of view, it was an opportunity lost as they failed to hold on to the ball and made some poor decisions close to the line.

There was never much in it. Lansdowne, playing with the wind, led 13-10 at half-time. Kieran Lewis scored a try, converted by Eoghan Hickey and Hickey landed a penalty, while Clontarf replied with a try from Eoin Cremen, converted by Noel Reid.

But Clontarf moved 20-13 clear in the second half. Their impressive hooker Aaron Dundon crossed for a try, which Reid converted, and Dufficy kicked a penalty.

A further Hickey penalty reduced the deficit to 20-16 but Lansdowne could not manage the all-important try. Another disappointment was a broken leg to wing Matt Healy, but they do remain in third spot and still very much in the running for promotion if they can win their final two games

A shock 34-25 home defeat at the hands of Blackrock College means that last year’s beaten finalists St Mary’s College are now in danger of missing the Ulster Bank League play-offs.

The Templeville Road outfit remain in third spot but are now just two points ahead of Young Munster. Furthermore, their final two games are against Cork Constitution and Old Belvedere.

Quite clearly, they will need to improve on Saturday’s effort. St Mary’s led 15-14 at the interval but Blackrock took complete control in the second half.

It was an outstanding effort which sees Blackrock move further away from relegation trouble up to fifth spot in the table. They scored five tries through Alex Dunlop, Alan McGinty, Jan Simon-Byrne (2) and Mark Scott-Lennon, with Robert Sweeney replying with two tries for St Mary’s.

Young Munster, meanwhile, were moving closer to St Mary’s with a 16-3 home success over Shannon. Ray Moloney got the game’s only try, the rest of Young Munster’s points coming from two penalties and a conversion from Alan Kingsley and a drop goal from Willie Staunton.

Old Belvedere remain at the top of the table on points difference, despite being held 16-16 at Anglesea Road by Dolphin. They led for most of the game with tries from Danny Riordan and Eddie Devitt but Dolphin were never out of it.

They were inspired by Barry Keeshan who contributed all 16 points with a try, a conversion and two penalites.

Cork Con, surprisingly, were held to an 11-11 draw by bottom of the table Garryowen. Scot Deasy crossed for Cork Con’s try, while Alan Gaughan was responsible for all of Garryowen points, scoring a try, and kicking two penaties.

In Division 1B, Buccaneers are making life very difficult for themselves at the chase the second automatic promotion spot behind Clontarf. Their 21-15 defeat to Connacht neighbours Galwegians at Crowley Park was their third in a row.

Former St Mary’s wing Darragh Fanning was one of Galwegians try scorers. Their other two came from Dave Nolan and Conor Muldoon with Kolo Kiripati contributing two tries for Buccaneers.

Elsewhere, fourth placed UL Bohemians went down to a surprise 23-20 home defeat to the improving UCC outfit. Dungannon had a much needed 21-8 home victory over Bruff, a result which means that the Limerick outfit are now just two points ahead of Galwegians at the bottom of the table.