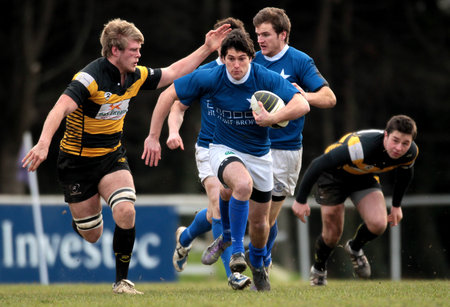 For much of this season, Cork Constitution have found themselves upstaged by their Dublin rivals. Old Belvedere had set the standards to deservedly head the league at the half way stage of the campaign.

Not any more. They were second best for virtually all of this match with Cork Con producing a brand of rugby which undoubtedly makes them favourites to retain the trophy.

Much is clearly going to depend on just who is available, but Cork Con have strength in depth and a remarkable facility for introducing new talent. On Saturday they were without their highly influential second-row Ian Nagle because of his outing for the Irish Wolfhounds against Scotland A the previous night.

O’Flaherty, normally a No 8, had a terrific match, scoring one of his side’s three tries, and setting up another with a 40 metre run. No doubt, he was suited to the high tempo Cork Constitution played at throughout this encounter.

To add to a fine day’s work, Munster hooker Denis Fogarty made an impresssive comeback after his long spell out with a shoulder injury. He scored Cork Con’s second try before being substituted 10 minutes into the second half.

Old Belvedere tried to respond by playing at a high pace. But they should could not get the required forward platform.

Consequently, their powerful No 8 Leo Auva’a failed to make his normal impression. Neither, in truth, did most of the Old Belvedere team with the notable exception of Danny Riordan at full-back.

Riordan did everything possible to try and keep his side in contention. He scored a try, and provided the pass for another, but, ultimately, Old Belvedere were never in with a chance of turning things around.

Playing for the first time without their record scoring wing Cronan Healy, now in Australia, Cork Con took off at a tremendous pace. By the end of the opening quarter, they were 15-0 clear.

O’Flaherty and Fogarty scored tries, with scrum-half Jerry Hurley landing a conversion and a penalty. O’Flaherty’s try came after a spectacular move, started near their own line.

For a brief period, Old Belvedere got back into it when Riordan gather a chip through from Andy Dunne to score for a try which Dunne converted. But Cork Con resumed control in the second half, Billy Holland sending Brian Hayes in for a third try, before Hurley made it 23-7 with another penalty.

To their credit, Old Belvedere at least denied Cork Con a bonus point, and hit back to gain a consolation score when substitute Derek Buckley got over for a try in the closing stages.

Their coach Phil Werahiko took the defeat firmly on the chin, stating: “Cork Con were very good. They were out of the blocks very quickly and we were always chasing.”

THERE are already strong indications that Cork Constitution, Old Belvedere and St Mary’s College will claim the three Ulster Bank League Division 1A semi-final spots, although there is still a long way to go.

Young Munster, for example, may be fourth but they are still only three points ahead of bottom team, Blackrock. That said, their recent form suggests that they are capable of staying out of trouble.

Having trounced Dolphin in their last outing, they came within a whisker of upsetting St Mary’s. It took a late drop goal from substitute Gavin Dunne to secure victory for the home side.

St Mary’s had led 10-8 at the interval with out-half Ian McKinley scoring a try, converting it, and landing a penalty. Young Munster responded with a try from wing Aaron Carroll and a penalty from Alan Kingsley.

A further penalty from Kingsley left Young Munster 11-10 ahead until late pressure brought about the opportunity for Dunne to land the winning drop goal.

Dolphin, beaten 35-0 by Young Munster last time out, responded by travelling to Stradbrook to defeat Blackrock 32-16. Yet again, the boot of Barry Keeshan was vital, the Dolphin captain contributing 22 points.

Clontarf stay out in front in Division 1B but second placed Bucaneers also remain very live contenders. Either one could still claim the semi-final spot from this division.

Bernard Jackman could not fault his Clontarf side as they scored five tries to see off Galwegians 30-10 at Castle Avenue. Michael McGrath, Michael Keating, Aaron Dundon, Barry O’Mahony and Noel Reid secure the tries.

They are now five points clear at the top but Buccaneers do have a game in hand. And the manner of their 35-8 home victory over Bruff suggests that they are not going away.

After holding a slender 10-8 point lead at the interval, they cut loose in the second half with 25 unanswered points. Their tries came from Gareth Halligan, Kolo Kiripati, John O’Brien and Conor Higgins.

Somehow, Lansdowne remain in third spot in spite of going down to a surprise 16-11 away defeat to UCC. It was sweet revenge for the students having conceded 61 points to Lansdowne on the back pitch at the Aviva Stadium earlier in the campaign.

Lansdowne led into the second half but UCC then came good with with a rally which saw skipper James Ryan scored a vital try.

UL Bohemians have moved into fourth spot with a 32-22 home victory over Dungannon. The key to the success was a great start which saw Darren Moroney and Martin McPhail score tries in the opening 14 minutes.