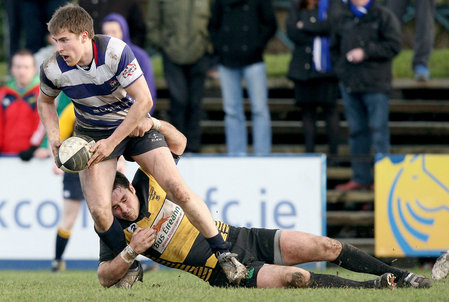 Young Munster just won’t go away. Saturday’s hard fought Ulster Bank Division 1A 13-11 victory over Blackrock College at Stradbrook means that they are in fourth spot and still in with a chance of making the play-offs…

The top three Old Belvedere, Cork Constitution and St Mary’s College remain firm favourites but Young Munster are definitely not out of it. With three games remaining, they trail third placed St Mary’s by six points.

A relatively short while back, you would have given them no chance but they have put together a run which has seen them beat the two leading teams Cork Constitution and Old Belvedere, and come within a whisker of recording an away victory over St Mary’s.

Now they must win their last three games against Munster opposition, Shannon, Dolphin and Garryowen and hope that St Mary’s slip up. The only thing their coach Mike Prendergast can be sure about is that they will need to play better than they did in beating Blackrock.

“We were a bit below par today,” Prendergast admitted. “We played some decent rugby in the second half but our execution near the line let us down.

“In saying that you have to give credit to Blackrock, they were very hard to break down. You have days like this, and we are just pleased to come away with the victory.”

In truth, the game wasn’t a great spectacle. There was a huge amount of effort, with two well matched packs fighting it out, and defences very much on top.

Blackrock weren’t helped by the fact that Andrew Conway, Niall Morris and Ian Madigan were needed by Leinster and Brendan Macken is on the injured list. Perhaps they also weren’t helped by mixing up the Young Munster and the Shannon crests on their team sheet.

Not that Young Munster ever need motivation. They gave their usual hugely committed display against a Blackrock outfit which also gave absolutely everything.

The result was a really close contest. Young Munster led 10-6 at the interval with centre Matthew Costelloe scoring a try following sustained pressure in the 19th minute.

The home side then went in front early in the second half. Following a great run by right-wing Dave Rowan, centre Rob Keogh forced his way over for a try.

Unfortunately, the same player missed the conversion, so Blackrock were left holding on to a slender 11-10 advantage. It didn’t last with the accurate Kingsley banging over a long range penalty to leave Young Munster 13-11 in front.

That turned out to be the winning score. At least Blackrock did secure a losing bonus point which keeps them four points ahead of bottom placed Garryowen.

“We have to keep fighting,” stressed their coach Andy Wood. “It’s disappointing to have lost such a close game but you can’t fault our effort or energy. Young Munster are a very smart defensive team and really hard to break down.”

Old Belvedere are back on the top of the Ulster Bank Division 1A table by virtue of a 30-23 bonus point success over Shannon at Coonagh.

The bonus points means that they move ahead of Cork Constitution on points difference. Not that it will unduly bother Cork Con as both clubs now seem certain to secure play-off spots.

After losing at home to Young Munster the previous weekend, it was important for Old Belvedere to respond in positive fashion. They did scoring five tries through Ben Woods, Dave Mongan, Danny Riordan, John Kennedy and Conal Keane.

The remainder of their points came from the boot of Keane. A disappointed Shannon must now regroup before facing Young Munster in a crucial Limerick derby next weekend.

Cork Constitution yet again proved their strength in depth by coming from 13-0 down to overcome Dolphin 23-16 at Musgrave Park. It was a significant victory given the fact that Cork Con lost to Dolphin earlier in the season and were again missing key players.

For a time it looked as though they were going to lose for a second time to their neighbours but they came good with Sean Scanlon and skipper Frank Coogan scoring tries. The other important factor was the place kicking of Gerry Hurley who landed a conversion and two penalties.

Dolphin lie fourth from bottom, level with Shannon, and just a point ahead of Blackrock College. They all must have been relieved to see bottom of the table Garryowen go down 39-15 at home to St Mary’s College.

This was a top class performance by third placed St Mary’s who crossed for five tries. They came from Mark Sexton, Richie Sweeney, Damien Hall, Ronan Doherty and Darren Hudson.

While St Mary’s are looking at the possibility of a play-off spot, Garryowen are going to have improve considerably if they are to avoid relegation.

Clontarf comfortably lead Division 1B following a hard earned 17-15 away success over the improving UCC outfit. It took a try by Michael McGrath, converted by Martin Dufficy in the final minute, to earn Clontarf their victory.

Second placed Buccaneers went down to their second successive defeat at home to UL Bohemians. The Limerick side won 18-11 with tries from Sean Rennison and Darren Moroney to confirm that they are one of the form sides around at the moment.

But Lansdowne stay in front of them in third spot by virtue of a runaway 39-10 bonus point victory over Dungannon on the back pitch at the Aviva Stadium. Matt Healy and Ciaran O’Boyle crossed for two tries each.

The remaining game saw bottom of the table Galwegians record a surprise 25-15 away victory over Bruff. The Limerick side led going into the closing minutes but tries from Tiernan O’Halloran and Brian Murphy then gave Galwegians a dramatic win.