Under 14 Blitz At Malahide RFC… 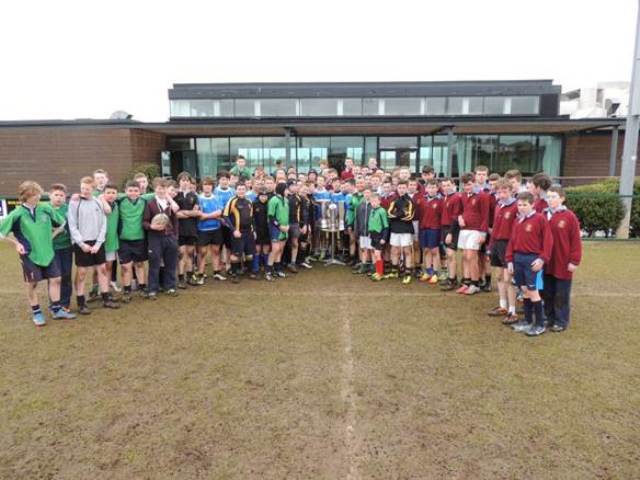 As the games got underway the weather looked like it would stay dry and this made the games all the better to watch. As each team got comfortable with the rugby being played it became apparent that the work that has taken place within the schools had sunk in.

The games were played with a high skill level and some superb tries were scored by all the teams involved. Malahide’s matches with Portmarnock certainly left no question that a local rivalry was present with some ferocious tackling and some great running rugby.

The work being done in Castleknock really showed as the development in their squad was huge. As the games came to a close the RaboDirect, Amlin Challenge Cup and British and Irish Cup trophies arrived and the students capped the day off with a group photo with Leinster Rugby’s achievements of last season.

Brendan Carpenter Malahide CCRO added: “It was a superb morning at Malahide RFC with plenty of good rugby on show. It’s great to see the work within school whether it be school training or P.E modules is now being translated onto the pitch. The huge number from Malahide Community School is also positive as those players will become the make up of the schools rugby teams over the next few years.”

If any schools in the Malahide/Swords/Portmarnock area would like to participate in a similar programme please contact Brendan Carpenter at MalahideCCRO@leinsterrugby.ie.