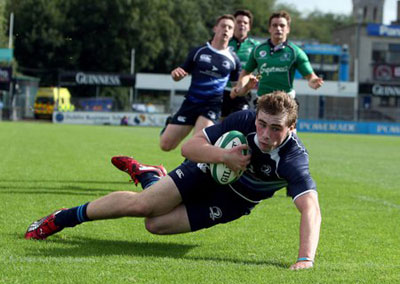 Castleknock College winger Michael Mellett helped himself to a brace of tries on 5 and 34 minutes, with skipper Luke McGrath adding an injury time try to leave Leinster with a commanding 27-0 lead at half time after St. Gerard’s out-half Steve Crosbie had chipped in with four penalties on 3, 12, 15 and 22 minutes.

Connacht fought back bravely in the second half, but a 51st minute try by winger Mark Roche, Leinster’s fourth of the afternoon, was converted by Crosbie and Leinster’s defence wasn’t breached to kick off the interpro’ series on a high.