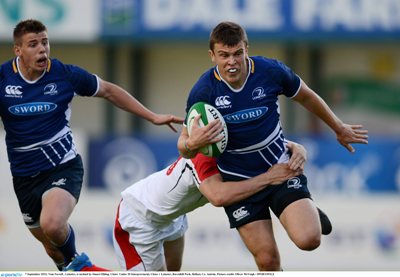 The Leinster Under-20s, sponsored by Sword Security, had to give way 24-16 to a super-charged Ulster in a fierce Interprovincial Championship match at Ravenhill on Friday night…

The visitors came into this one on the back of a narrow loss to the Leicester Academy the previous week and looked in good shape to get their campaign off to the right start.

But, they were quickly taken out of their stride by a very determined home side dotted with players
attempting to beat Leinster for the very first time.

Ireland Under-20 Stuart Olding showed some of the skills that earned him a ticket on the plane to the Under-20 World Cup in South Africa in June with a nerveless display for goal-kicking.

He struck penalties in the fifth and 20th minutes, breaking even with Leinster centre Tom Daly to leave it 6-all at the end of the first quarter. Daly squeezed the visitors back in front in the 23rd minute only to suffer an injury shortly after which forced his withdrawal.

The Ulster three quarter line was boosted by the late inclusion of another Ireland U20 in centre Chris Farrell. But, it was full-back Rory Scholes who first pierced the Leinster defence for Olding to convert in the 28th minute, quickly following this with a penalty just before the interval for a 16-9 lead.

Leinster had to respond in the third quarter. They had enough ball, but not the wherewithal to turn it into points and the home side lifted to siege for Olding to strike his third penalty in the 66th minute. From there, number eight Ben Alexander burst over three minutes later to make the game safe.

Leinster scrum-half David Shanahan did provide some reward for his forwards graft by converting his own try five minutes from the end. It would have come as scant consolation for a highly-rated outfit, heavily favoured to capture this Championship.

“It was a very disappointing start to the Championship. We had four games in preparation for this. We thought we could come here and win. Sadly, it didn’t turn out the way we wanted,” said Team Manager Tony O’Beirne.

Leinster will have a chance to make up for this disappointment when they will face Munster at Donnybrook next Friday night.