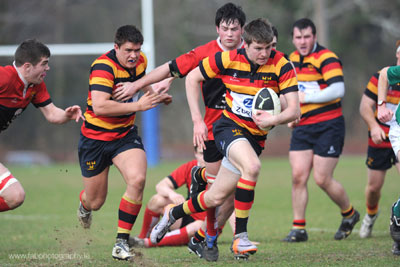 UCD will be bidding to capture the Fraser McMullen (Under-21 All-Ireland) Cup when they meet Lansdowne in the decider at Coolmine RFC on Sunday afternoon (KO: 2.30pm)…

The Clonskeagh side have earned their path to the final the hard way after coming through a series of tough games – with wins away to Shannon and Clontarf. Victory would also be a perfect send-off to their Director of Rugby John McClean who steps down at the end of the season. Lansdowne, on the other hand, have dominated the League and look an all-round organised and disciplined unit.

Their forwards epitomise a voracious work-rate and collective determination. They hunt in packs, and play as a unit, with burly prop Scott Caulbeck, Charlie Butterworth, and talisman David Heffernan all primary ball carriers. Their back line is encumbered with talent from out-half Craig Ronaldson to the powerful Neil Cullen on the wing. They need to play the way they did in the second half against UCC and Cork Constitution, releasing their backs at every opportunity, if they are to stand any chance of winning.

Lansdowne’s lineout creaked against UCC in the quarter final, a set piece which is a primary strength for UCD, with locks Alan O’Connor and Emmet McMahon an influential aerial presence.

Both teams should match each other in the tight, early exchanges. UCD’s pack will work the phases and employ a pick and drive tactic, with prop James Treacy providing the rumble and the workaholic back-row pairing of Paddy Dix and Eoin Joyce equally influential.

If UCD attain a level of dominance up front, they have the opportunity to unleash the significant qualities of their back line, with play-maker Niall Earls, David Lynch and winger Jordan Egan pulling the strings.

There were no major injury concerns in the semi-finals, with ace kicker Earls shipping a late knock, but confirmation from the UCD camp is that he has recovered. Lansdowne have some injury concerns too, but should remain unchanged from their last two outings. Skipper Heffernan went over heavily on his ankle against Cork Con last Friday, but is expected to play, whilst full back Conor Toolan is currently a doubt.

It will be tough to call a winner, with both sides possessing a powerful pack, and a solid half back combination. Judging by UCD’s ferocity up front, they should just shade it.