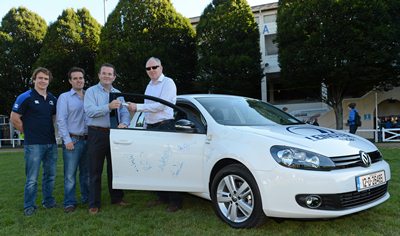 Colm Grehan from Dunboyne in Co. Meath was the lucky winner of the exclusive Golf Match signed by the Leinster Rugby Team…

Colm’s winning slogan was “BOOT-IFUL FLYHALF” and this was selected from thousands of entries to the competition which was run in conjunction with the Irish Independent and Evening Herald.

Colm received the keys of the new car prior to Leinster’s PRO12 win over the Dragons in the RDS last weekend.

CAPTION: Colm Grehan, right, from Dunboyne, Co. Meath, is presented with the key for his new Volkswagen Golf by John Donegan, Head of Sales & Marketing Volkswagen Group Ireland. Also pictured is Geoff Lyons from Independent Newspapers and Eoin Reddan from the Leinster Team.