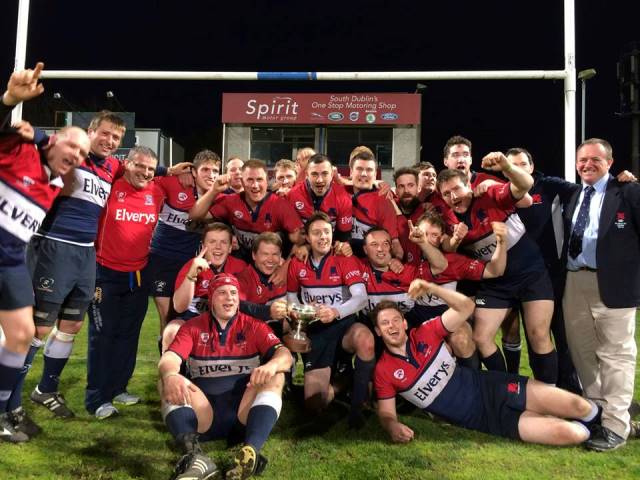 With the lead changing hands six times during the game – it was sweet revenge as Wesley, having topped the League, were beaten in the Play Off between the two top teams by none other than Belvedere  –  so honours even between two excellent sides at the end of a long season.

Wesley had the better of the opening 15 minutes but failing to take their chances found themselves down 6-0 to two penalties – however three penalties by Ken McLaughlin had them ahead by the half hour mark – a try by Belvedere responded to by Richard Rowe, following an excellent cross kick, restored Wesley’s lead at half time [14-11] –  a narrow lead considering their overall dominance in the first half although Belvo’s excellent line out helped to stem the tide.

An early second half penalty by McLaughlin increased the lead to 17-11 but a converted Belvo try put them back in the lead [18-17]  & as both sides began to empty their benches Belvo mauled over the line, at the Bective end, following another good line out take to stretch their lead to 23-17  –  crucially the reasonably kickable conversion fell short.

Even though tiring Wesley dug deep & with five minutes remaining were called back for a knock on as Ian Sheridan crossed the line – from the resulting scrum, an area Wesley held the upper hand for most of the match, Belvo conceded a free kick which was taken quickly by scrum half Stephen Hemmingway & his half back partner McLaughlin touched down under the posts for a try which he also converted to regain the lead [24-23] much to the delight of the large home crowd.

Wesley kept Belvo out in injury time by a series of picks & drives, albeit around their own 22 ! to win an excellent cup final by the narrowest margin.