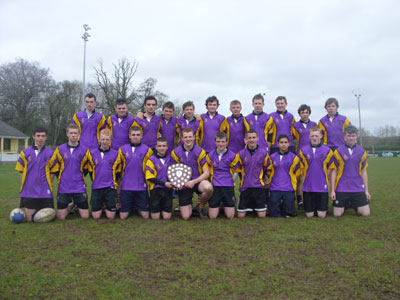 What a game this was. The Bokerboys had to pull out all the stops to emerge victorious and create their own piece of history, becoming the first team to bring a Leinster rugby title to the school.

St.Mel’s were a strong physical side backboned by many players from Longford R.F.C., but Wexford had been in this position before, and the skill level and commitment in defence of this side has to be seen to be believed.

Wexford opened with a strong wind at their backs. Field position was crucial and outhalf Eoin Roche wasted no time in getting us deep into the opposing 22. Following three quick rucking phases, captain Collie Joyce-Ahearne crashed over to open the scoring. Eoin Roche added the conversion and Wexford were on their way. This was quickly followed by a Steve Roche try again following some driving play by Gavin Byrne, Evan Dunbar, James Byrne and Darragh Commiskey.

Wexford were dominant and following a chase onto a Roche kick, Ian Moran offloaded to Mikey Roche who in turn fed Collie Joyce-Ahearne who cut through to score by the posts. The extra points were added by Eoin Roche to make it 19-0.

As expected Wexford had to defend at times and John Joe Browne and Mikey Roche were outstanding in this department as they sent the opposing centres backwards in tackle after tackle. However just before the break St. Mel’s did manage to breach the line and opened their tally with seven points.

Turning around at half time and facing a huge wind Wexford would have to play the half of their lives to capture the honours. Attack after attack followed and Mel’s were on the score board again, 19-12. With the game in the balance Wexford responded with driving forward play following a John Joe Browne run into the opposing half, having sucked in the defence, Darius Smith released the backs and quick handling through Eoin Roche, Sean Stafford put Moran into space and his pace got him to the corner, try Wexford. Ten minutes later an identical move resulted in Moran getting his second try, 29-12.

The Longford side came again and despite the efforts and heroics of the likes of Conor Fenlon, Mikey Coleman and Ruairi Devereux they crossed for two tries, 29-22. All eyes were on the clock but still try saving tackles by Gavin Byrne, Collie Joyce-Ahearne, John Joe Browne and Ian Moran were needed to preserve the lead. The sound of the final whistle was greeted with relief and joy as the Bokerboys celebrated a historic win.

Both Liam Barry and Thomas Barry were injured and unable to travel.