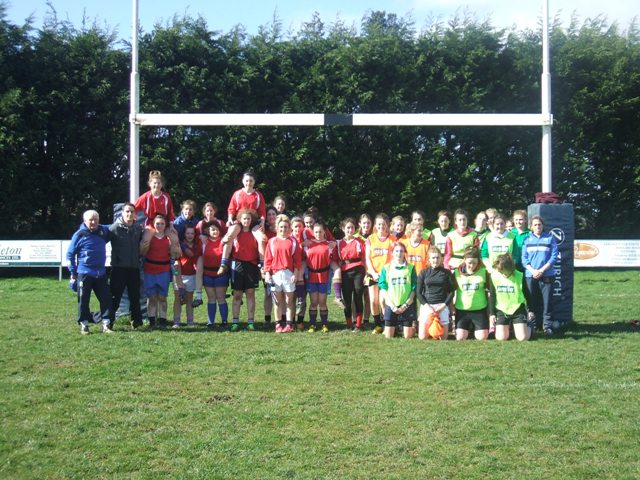 Played in brilliant sunshine on a surface with plenty of “give” in it, both sides were very evenly matched. Skill levels were high but the game was played in a very sporting attitude. Full marks to teachers Kevin Barry, Wexford V.E.C. and Deirdre Colfer, Presentation for their control and discipline of each team.

After two twenty minute halves, the sides were level scoring a try each. Extra time was needed to reach a decider but again after two five minute halves they were level again as they scored another try each. Now it came to “sudden death” and Stacey Farrell with blistering pace broke through, what was up till then a solid Presentation defence, to score the winning try for Wexford V.E.C. It was a pity to see a losing side on the day but such is sport.

Wexford V.E.C. now qualifies for the finals of Leinster Rugby Lep tournament, along with seven other Leinster finalists, to be played at Leinster Rugby’s Donnybrook Stadium on Thursday 27th March 2014. This is a great opportunity for Wexford V.E.C. who trains, rain, hail or snow, every Friday at Wexford Wanderers R.F.C. facility at Parklane with Kevin Barry and Noel Ferguson Leinster Rugby C.C.R.O.

Keeping the scores, Photographs and administration was Aoife Hennessy, on work experience with Sports Active Wexford.