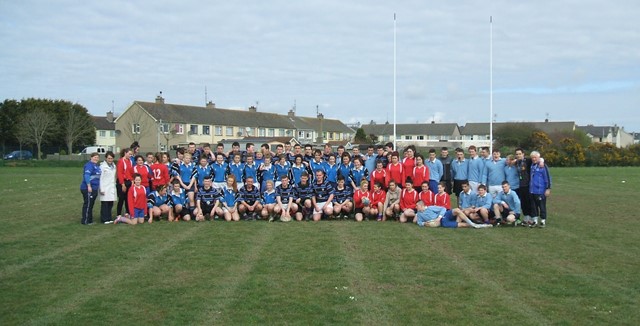 Spring was in the air and spirits were high with the long awaited boys and girls rugby blitz between the two VEC colleges in the Wexford area.

This all took place last week in perfect conditions on a lush green pasture. Rugby at the “grass roots” deep in the south east corner of Ireland is what the fame is all about giving boys and girls the opportunity to express themselves in their understanding of the game. Both colleges are part of the coaching programme implemented by the Leinster Rugby Wexford Co. Council Community Club Partnership which is proving a huge success in increasing the number of young people participating in rugby in the area.

In the boys game, what a “cracker”, with a very experienced Bridgetown team winning the day. The home side had a large number of players who are playing weekly rugby with Wexford Wanderers RFC and had current Leinster Youth Prop Forward Greg McGrath in their team. Tackles were hard and furious but fair with no quarter given by either side. It was a great credit to Wexford VEC who never gave up competing in the game and scored a number of tried on the day.

In the girls game it was the first time that many of the girls played contact rugby as under the scheme they have been coached in tag and lep rugby by Noel Ferguson local C.C.R.O. who refereed the boys game. Teacher Kevin Barry of Wexford VEC did the “honour” in the girls game. This was a hard fought encounter with the Wexford town girls getting the upper hand on the day. Both sets of girls really enjoyed the game and are now insisting on playing full contact rugby on a regular basis.

These are vital colleges for the development of Wexford Wanderers “vixens” womens rugby and rugby in the area. Full marks go to Bridgetown for hosting the event and to Carrie Doyle, Fleur Moran and Oznat Manning who are very involved with the local C.C.R.O. in coaching rugby football in Bridgetown VEC. What can be said for the rentless persuit, promotion and implementation for all the rugby playing students in Wexford VEC, without Kevins Co-operation and the good will of the college, a lot of their students would be deprived of playing the game of rugby.