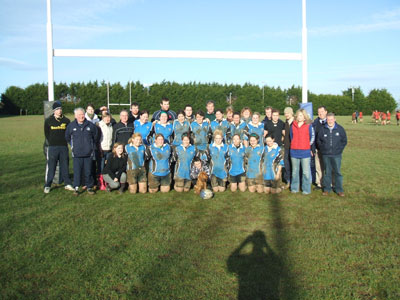 The club are now looking forward to their third season and are pleased to boast a Senior and a Junior team as well as a few mini’s this season.

The last two years have also seen some of our players been selected to play for the Leinster Under-18s. We are actively involved in promoting Women’s rugby in both Primary and Secondary schools in our area as it is our plan to have a girl’s underage system from age 8 to 16yrs in place over the next few years.

The Women’s team are active in all aspects of the club from coaching the mini’s to getting involved in all fundraising events. Last year also saw the girls getting involved in the community by participating in the local St. Patrick’s Day Parade and coming away with a special award. When not on the pitch we can be found supporting our Senior Men’s team.

Their coaching staff consist of Head Coach Noel Ferguson who is also the Leinster YDO (Youth Development Officer) for our area and Assistant coach Fintan Bolger, there are many other members of the club who when not playing will be found to helping out with coaching and matches.

A lot of time and effort has gone in to developing ladies rugby in Wexford, and this primarily started with Noel Ferguson who has promoted the sport in the Local schools. Also along with Noels work the Vixen’s decided to call into schools and promote the game.

This decision came about with a number of our players leaving to go to college, and from talking to girls around Wexford they notice that most girls were apprehensive about joining. They had the impression that you had to be well-built to play and also that it was a dangerous sport.

To change opinion the Vixens decided that sending girls from all positions of the field would give a better understanding to students that no matter size and stature anyone can play rugby. The girls also answered any questions the students had about safety.

As a result of Noel’s dedication and the hard work of the Vixens numbers playing Ladies Rugby in Wexford has grown and the team is thriving.

Training takes place on Wednesday and Friday nights at 7.30pm.