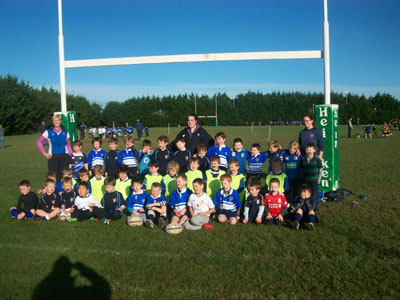 Having achieved several years of enjoyment as a result of playing with the ladies senior team, Wexford “Vixens” have decided it’s time to return the compliment of the endless hours of training they received by putting their own free time back into the club…

What better way to do this than to coach the up and coming youth! As well as their successful playing capabilities the ladies have also qualified as mini and youth coaches.

As they are in agreement with the belief that a thriving player requires the construction of a solid foundation, the coaching ladies are currently focusing their attention on the mini’s section at the Wexford Wanderers club.

The girls have received great courage and inspiration from James O’Connor, who was recently awarded Leinster Club Evening Herald Volunteer of the Month award, as a result of coaching at the underage section for near on 40 years!

Numbers in attendance are enough to speak for the success and popularity of the ladies. In previous years the Under-7’s section was thought successful with numbers between 15 and 20, however the 2010/11 season has seen a weekly attendance of in excess of 46 children, including both boys and girls.

The commitment and determination of these young stars is such that even the recent torrential downpours fail to dampen their spirits, with one 6-year-old being quoted recently saying – “Hey coach, we’re real rugby players now. We’re playing in the rain…” having been soaked by a shower of hail!

All at the club wish the girls continued success at both a coaching and competitive level.