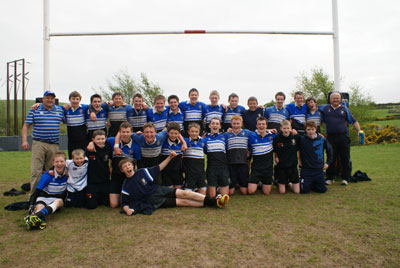 Wexford had overcome strong opposition from North Kildare in the quarters and edged out Mullingar in a replayed semi final, but Martin Fenlon’s charges still headed to Wicklow as underdogs. Boyne had beaten favourites Navan in the other semi…

As the game began, Boyne’s advantage in size looked daunting and they looked to outmuscle a smaller Wexford pack. Boyne had some early success in loose play but when a kickable penalty sailed wide of the Wexford posts after six minutes, the early pressure had been relieved.

As nerves settled and the first scrums were won, Wanderers reverted to the fluid passing game that had yielded tries thoughout the year. Just 12 minutes in, fast ball along the line put winger Ian Moran in space outside the 22. Outpacing the Boyne cover, he crossed in the corner before grounding under the posts. Matthew Joyce easily converted for a 7-0 lead.

That lead was whittled down 5 minutes later when Wexford conceded an unconverted try after turning over possession within their own 22. However the seven point lead was restored within 5 minutes when Moran scored his second try after a 30 yard sprint to the corner. The conversion proved too difficult.

At this stage Wexford looked comfortable. Mikey Coleman ,Shane Carter, Cormac Murphy,Gregory McGrath and Cillian Joyce were doing well in the scrum. David Kavanagh ,Connor Fenlon and Joe Coleman were performing well in both defence and attack. However, on the stroke of half time the game was back in the balance when a rare Boyne break resulted in a disputed touch down in the corner. Now 12-10 to Wexford.

Conceding so close to half time was a blow, but this Wexford side showed its mettle within 3 minutes of the restart. Pace was again the key as full back Paddo Redmond scythed through the opposing defence for a try which Matthew Joyce converted. Wexford by 9.

Wanderers had the bulk of both territory and possession for the next quarter, but Boyne were still threatening. The Drogheda boys then had a piece of luck when a speculative kick ahead bounced awkwardly and Boyne’s outside centre collected to score under the posts. The conversion made it a two point game with 7 minutes to go.

It was now time for cool heads and safe hands. Harry O’Connor at scrum half, Josh Healy and Broinn Coffey in the centre and David Tormey on the wing all had a big game, particularly in those last few minutes. Not content to simply hold on, Wexford went on the offensive. The whole back line were involved in a move that went touchline to touchline and back again before Joe Coleman delivered a flamboyant touchdown in the corner.

After a narrowly missed conversion, Wexford had to endure two nervous minutes but the Leinster title was never going North. Captain Josh Healy collected the cup on a score of 24-17 to complete a great underage double for Wanderers, whose U-13s were crowned Leinster champions in March.