Where Are They Now?: Ciaran Clarke 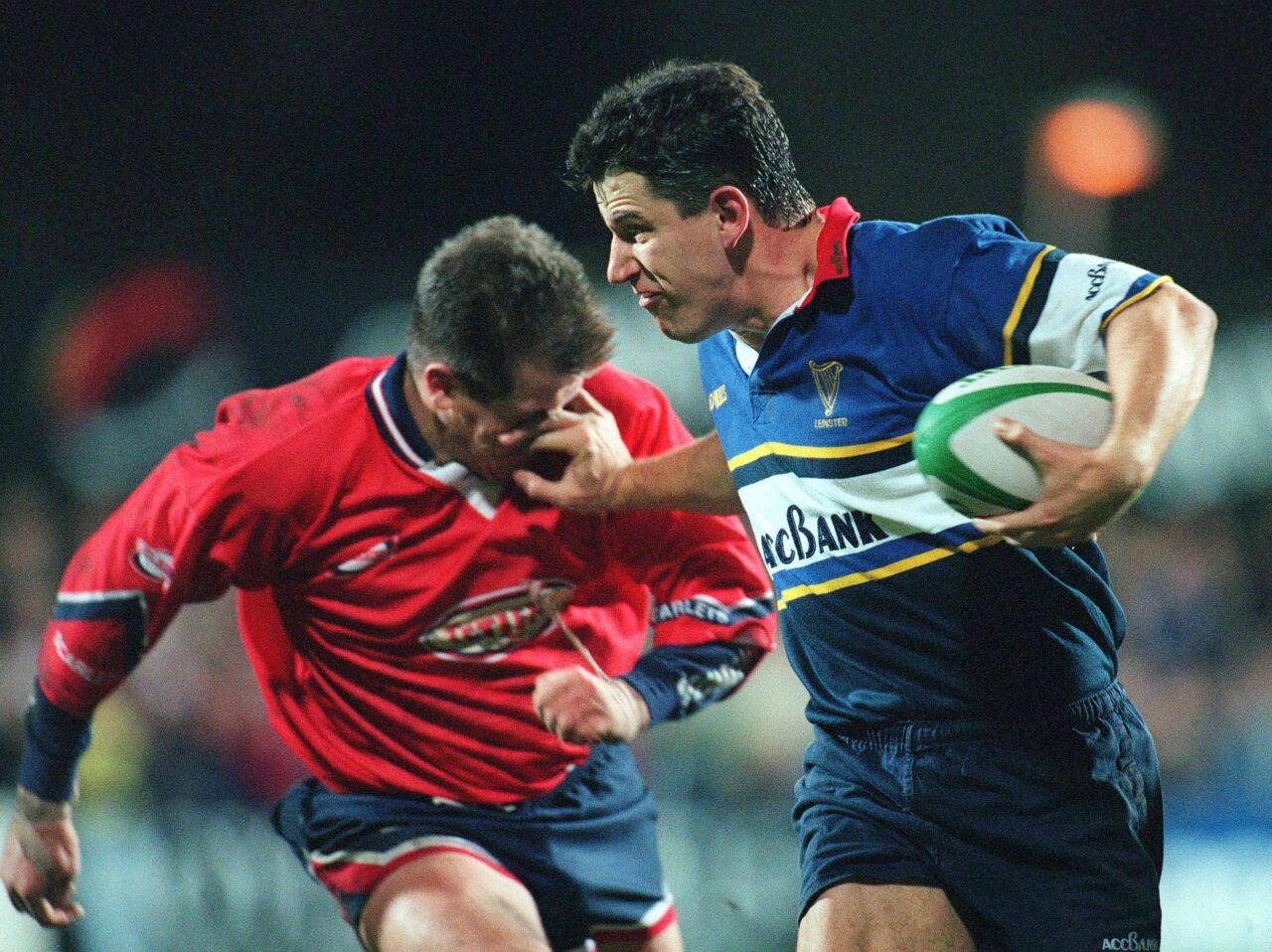 THEN: Ciaran Clarke played for Leinster Rugby more than 30 times between 1991 and 1999.

NOW: The 53-year-old lives with his partner Sonya Mooney and son James (18) in Rathfarnham, working as a Pharmaceutical Representative for Pinewood Healthcare.

Ciaran Clarke isn’t blessed with unimpeachable memory. He can’t be precise about how many caps he wore for Leinster – somewhere in the low 30s – or how many tries he put his name to in blue.

But, he has always held the detail of this date, the first Heineken Cup semi-final when Leinster came up short against Cardiff Blues at Lansdowne Road in front of an official crowd of 7,350.

And not for the disappointment of the 23-14 defeat to the storied Welsh club.

“I broke my hand in the game. I’m not sure how it happened. It might have been trodden on,” he says.

“Anyway, the ambulance got stuck when it left the wrong way, the underneath of it catching on a cement grid. The air had to be let out of the tyres to get it over the hump.

“I was left sitting in the Meath Hospital in my Leinster gear. After I was seen and let go, I made my way back in a taxi to Lansdowne Road hours later. There was no one there.

“I had to get someone to let me into the stadium to get my car. My pal Joe Lynch was getting married the same day and I drove one-handed in my Leinster gear on icy roads to The Glenview Hotel in Wicklow at night.

“Looking back on it now, you have to laugh. I don’t remember much about my rugby. But, I remember that day all too well.”

Ciaran was known for his big left boot and an athletic frame that made for a high ceiling coming out of Terenure College where he lost in the 1987 Leinster Schools Senior Cup final and was ruled out in 1988 with a broken collar-bone. 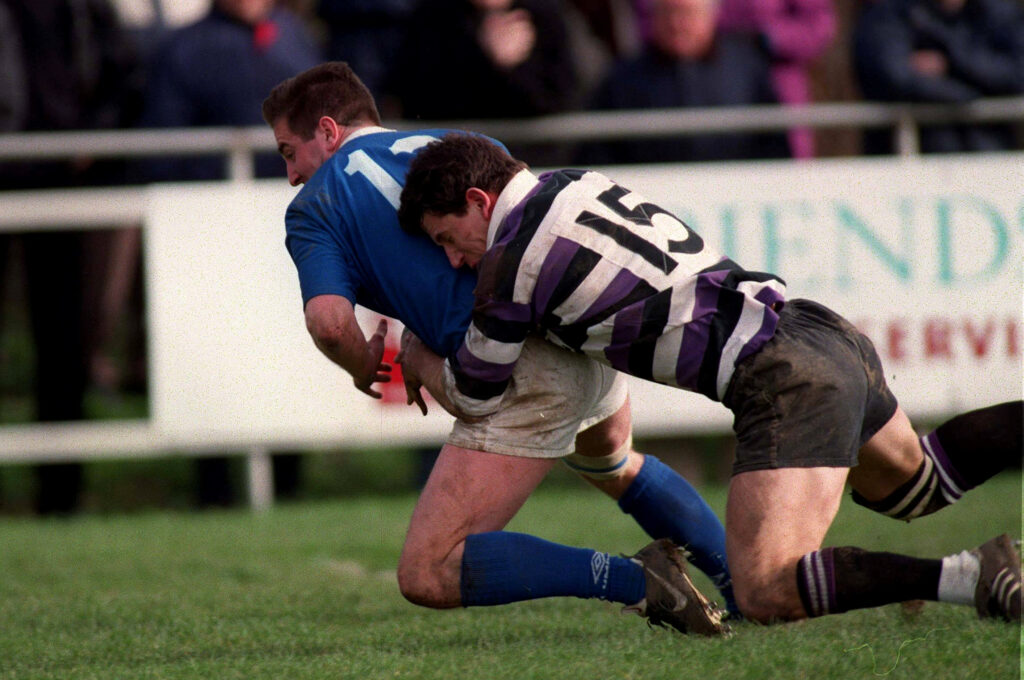 By late 1991, Leinster head coach Ciarán Callan sat down in an old-fashioned system with five selectors to give the 22-year-old his debut against Ulster.

This was back when there wasn’t a weight in sight at Leinster sessions and the priority was around organisation for the game at the weekend.

“It was very different back then. We were a combination of professional and semi-professional players.

“As a pro, you might go in early in the morning for a weights session at 8am, finish by 10am. Then, you are twiddling your thumbs, hanging around all day waiting for a pitch session in the evening because some of the players had to put in a day’s work in between.

“You are still training in the dark in the middle of winter even though you are a professional,” he adds.

Ciaran’s greatest moment for Leinster came against a galaxy of Wallaby stars in a tour match at Lansdowne Road in 1992.

“I never played against Australia in my five internationals for Ireland. So, I won’t forget the day we played them when they had Michael Lynagh, David Campese, Jason Little, Tim Horan and John Eales.

“I do look back with pride on the fact that I played for Leinster.”

One year later, Ciaran was at full-back for Ireland when Mick Galwey’s famous try sealed a 17-3 win over a multi-talented, bruising England side looking to complete a Grand Slam.

However, the appearances for Leinster and Ireland were limited due to suffering a ruptured cruciate ligament playing for Terenure against Sunday’s Well in October 1993, months after his first three Ireland caps.

“I played seven years of rugby with no cruciate in my right knee which sounds ridiculous now. I had my knee replaced 18 months ago because of it,” he reveals.

“When it happened, I had seen players who had opted for an operation. Some had better results than others. The surgeon told me I had to have surgery. I said: ‘No.’ 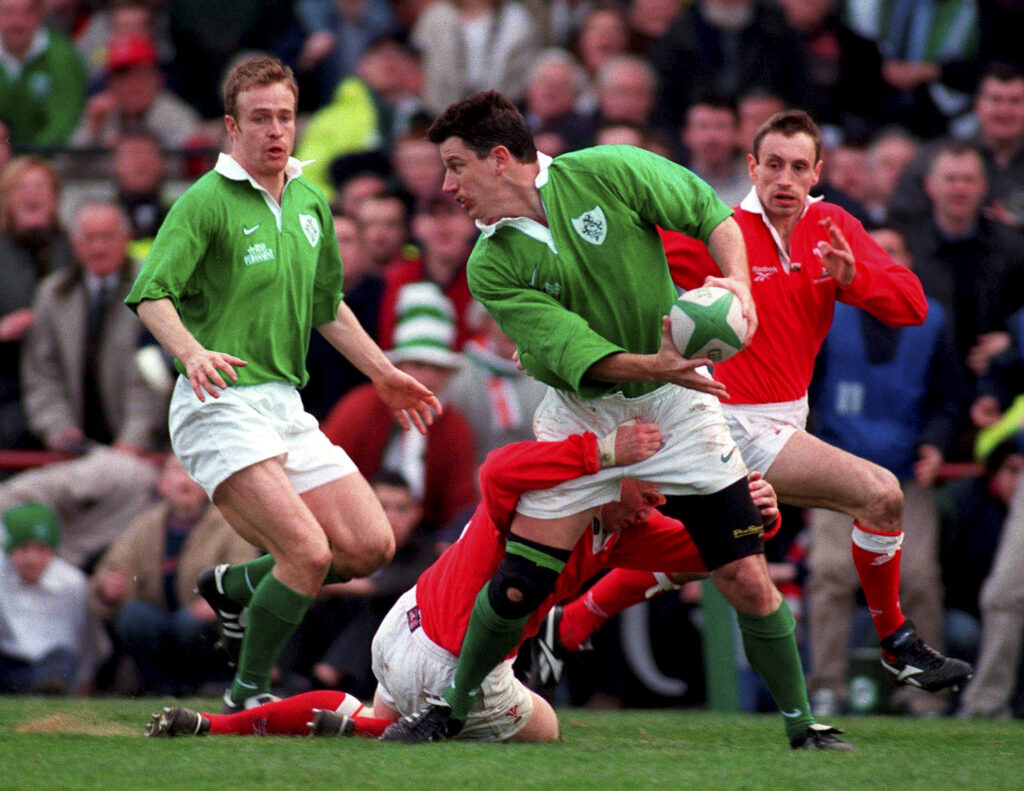 “There was no guarantee of getting back. I just didn’t fancy it. It wasn’t like it is today when a player could be back in eight months.

“It had a drastic effect on my game. I wore a big brace. I kept tearing bits of cartilage. I would plant my foot, turn quickly and the knee would wobble.

“I played a lot of my Leinster caps and my last two Ireland caps in that condition. You didn’t announce it back then. There was no social media. The scrutiny wasn’t the same. I never really talked about it publicly.

“I worked incredibly hard to keep my right leg strong and stable. But, over time, it got worse and I had to retire at the age of 30 in 1999 at the end of my first year as a full professional.

“In fact, that was probably the death knell because I was on my feet much more. It began to deteriorate rapidly. Bits of bone began to break off and it just became too sore.

“You would be running a line at training and be hit with this unbelievable pang of pain in your knee and it would go as quickly as it came.”

It was an enduring experience that had to be handled by myself, alone for quite some time.

“It was only when Liam Hennessy and Dave Fagan got involved in Leinster, that I got a lot of really good help.”

He didn’t have to be told when it was time to move on, concentrating on his career in the pharmaceutical industry.

“I loved playing rugby. It took me a long time to get over the end of my career because I didn’t finish on my own terms.

“I was just 30 when I packed it in. The rest of my body was fine. I was incredibly fit, bar a deteriorating knee.”

There must have been nights when sleep was uncapturable, lying in the dark, turning over in his mind how good he could have been with two legs under him.

“There probably was a bit of that. Where do you go with it? You would drive yourself mad if you kept thinking about it,” Ciaran admits.

“I suppose you could convince yourself, in romantic dreams, that you could have had so many more caps for Leinster and Ireland.”

Although, he casts his mind back to a moment when his eyes told him there was greatness on the way. 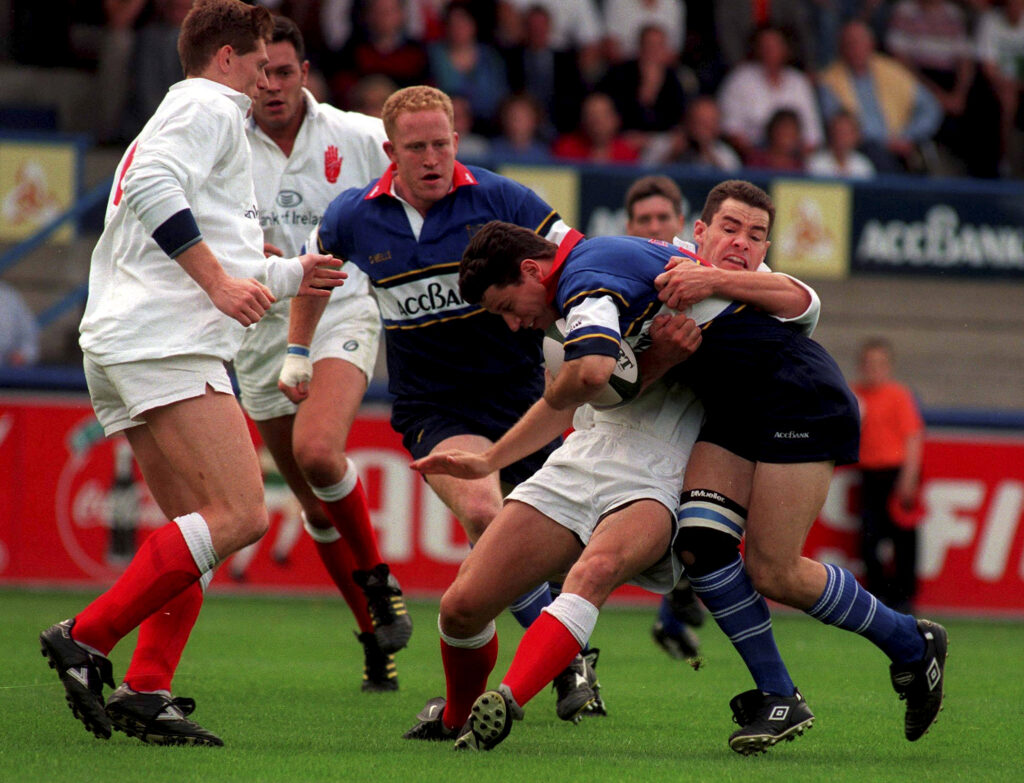 “I remember sitting in the Wesley end of Donnybrook with Kurt McQuilkin – we were playing for Leinster – watching the ‘A’ team play a match in 1999 and it had Brian O’Driscoll in the centre and Gordon D’Arcy at full-back.

“The two lads were ripping it up on the pitch, doing all sorts of brilliant things. Kurt and myself were looking at each other, realising our time was almost up.”

Ciaran has been able to turn those painful times into something more positive later in life, calling on an inner-strength he found during his rugby career.

“The planning and the determination needed, particularly with the cruciate, changes you mentally, gives you a certain resolve that you didn’t know was there.

“This has certainly benefited me in my work life, helping to push through things,” he shares.

Now, Ciaran marvels at the detail his son James has been opened to in Terenure College, the wing’s form in this year’s Leinster Schools Senior Cup earning an invite into the Leinster U-19 squad this summer.

“The game is so different now. The young players are completely on top of everything. The preparation and the game are light years away from what we did in the 1990s,” he says.

James probably knows more from what people said to him about Ciaran as a player than what his dad has shared.

“I don’t think he has seen too many of my matches because they are all on VHS tape in the attic.

“Anyway, he is his own man. The Leinster U-19s is all down to the work he has put in over a long period.