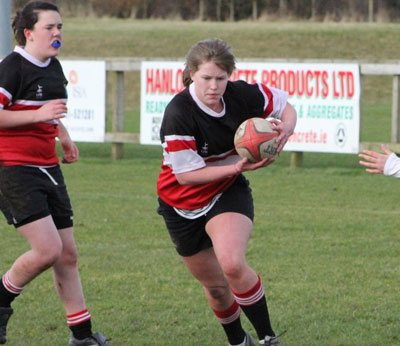 Wicklow Ladies RFC travelled to Cill Dara last Saturday, 12th February in the hopes of maintaining their undefeated record from seasons past in the Leinster Blitz…

On arriving tension was high as they were going to come up against teams that they had never played before. The U-17 team were in high spirits as they set foot on the pitch for their first match against Clane. It took less then five minutes for Wicklow to go ahead and the early score set the tone for the rest of the first half as the first try was quickly followed by another.

With 12 points under their belts Wicklow had a good cushion at half time. But Clane were not to be beaten lightly, towards the middle of the second half they stormed through the defence for their only try of the match. In the end Wicklow cleaned up with a 19-5 win against Clane.

The U-15 girls were not so lucky. They were narrowly beaten in both games by Cill Dara and Portlaoise. Team Coach Aidan Kearney has put a lot of work into teaching and coaching the girls and can be very heartened by the fantastic performance of the entire squad. The girls showed some great skills, passing moves and ball work through out. Confidence is surely high now and the girls are really looking forward to their next outing in two weeks time.