Wins for South-East and North-East in Shane Horgan Cup 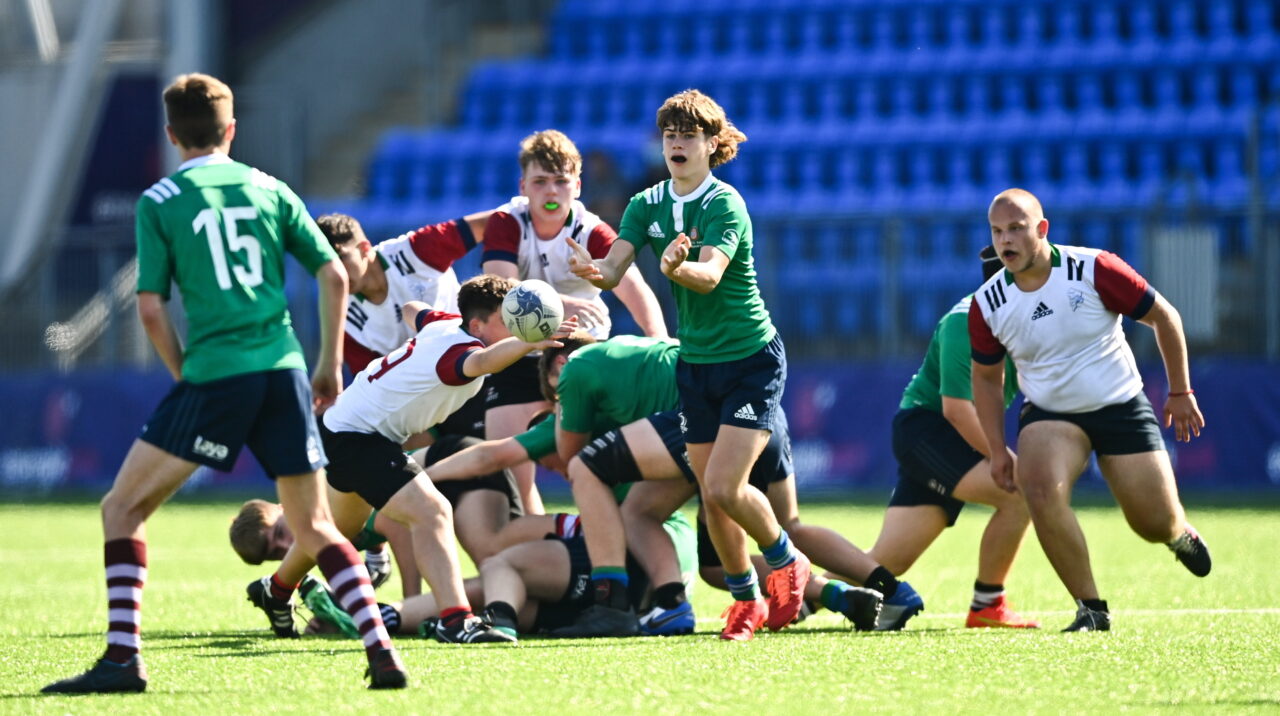 The South-East made it two wins from two rounds of the U-17 Shane Horgan Cup at Energia Park on a beautiful Wednesday afternoon.

This match marked the coming together of the winners from the previous round and it certainly didn’t disappoint as a contest.

The South-East were quick to impress, back-rowers Sean Roberts and Fionn Hickey driving in to force a penalty concession at the breakdown, out-half Brian Broderick’s shot at goal drifting left of the upright. 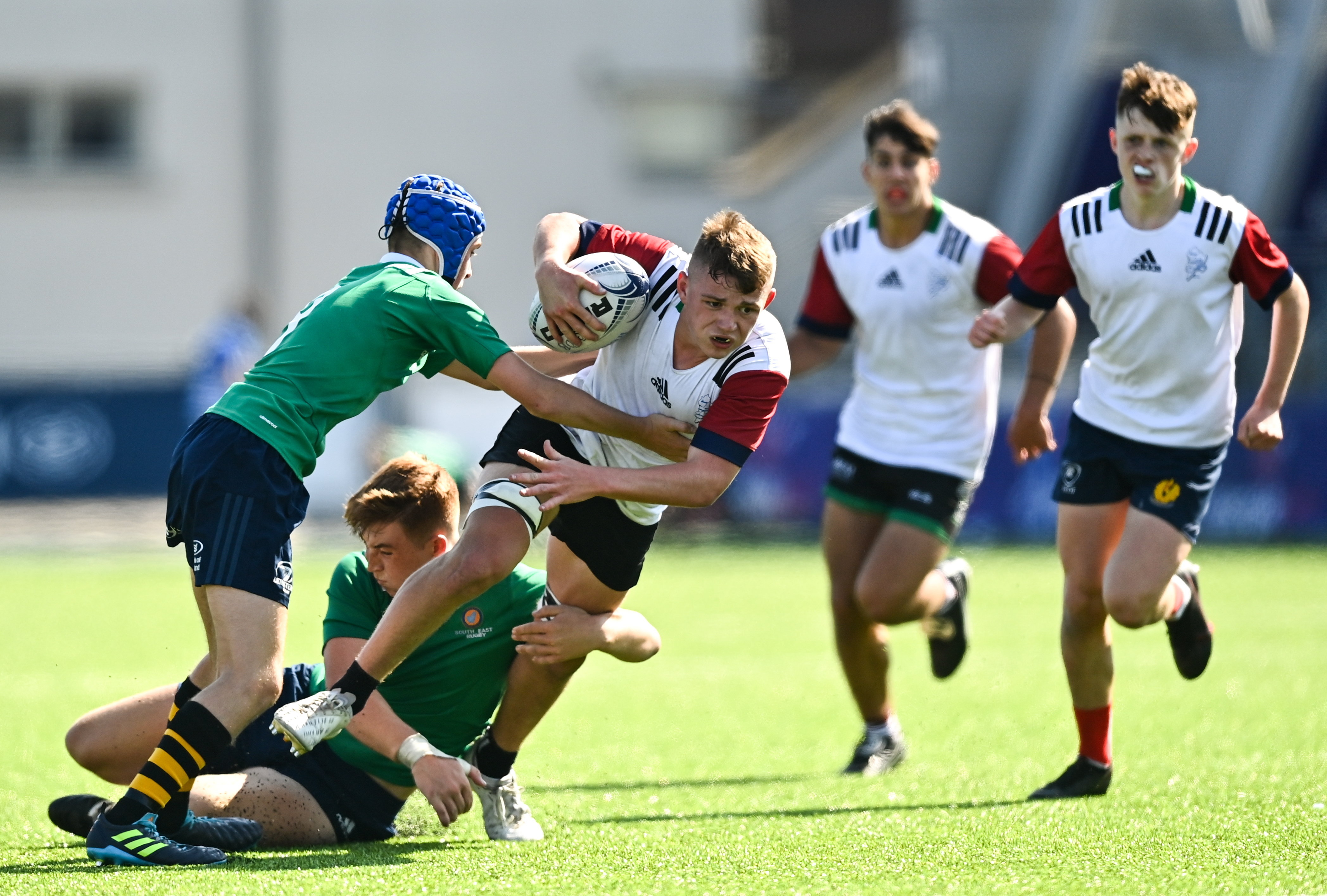 Midlands centre Conor Moore took the eye with a rip in the tackle and follow up carry through bodies, working alongside the energy and footwork of flanker Jack Boyan. A pounding run from South-East No 8 Hickey generated the front foot ball for Conor Fahy to hit it up the middle.

Just when the ball looked lost, hooker Donal Kealy picked up the pieces and, when prop Tadhg Ronan was stopped short, Hickey was there to twist to the line for Broderick to convert in the 10th minute.

Midlands lock David O’Rourke grabbed a turnover penalty at a ruck and popped up to break the gainline ahead of Jack Bates putting pressure on full-back Peter Burgess to deal with a crossfield kick. That man Hickey won a loose ball and wing Shane Duffy showed serious speed before Midlands No 8 Darragh Brennan broke the momentum with a steal on the ground.

Jack Burns had to be alert to repair the damage done from an attack breaking down as Gordon Prestage looked to hack the ball on. Brennan did damage up the right and centre Moore would have had room to manoeuvre were it not for the fine decision of Duffy to rush in off his wing.

A raid up the left by South-East put Prestage in a foot race against the cover and Midlands out-half Jack Bates had the pace to kill the ball, no more than five metres from his own line. The solid kicking of Bates moved Midlands upfield until Broderick turned the tide with an angled ball into the 22. 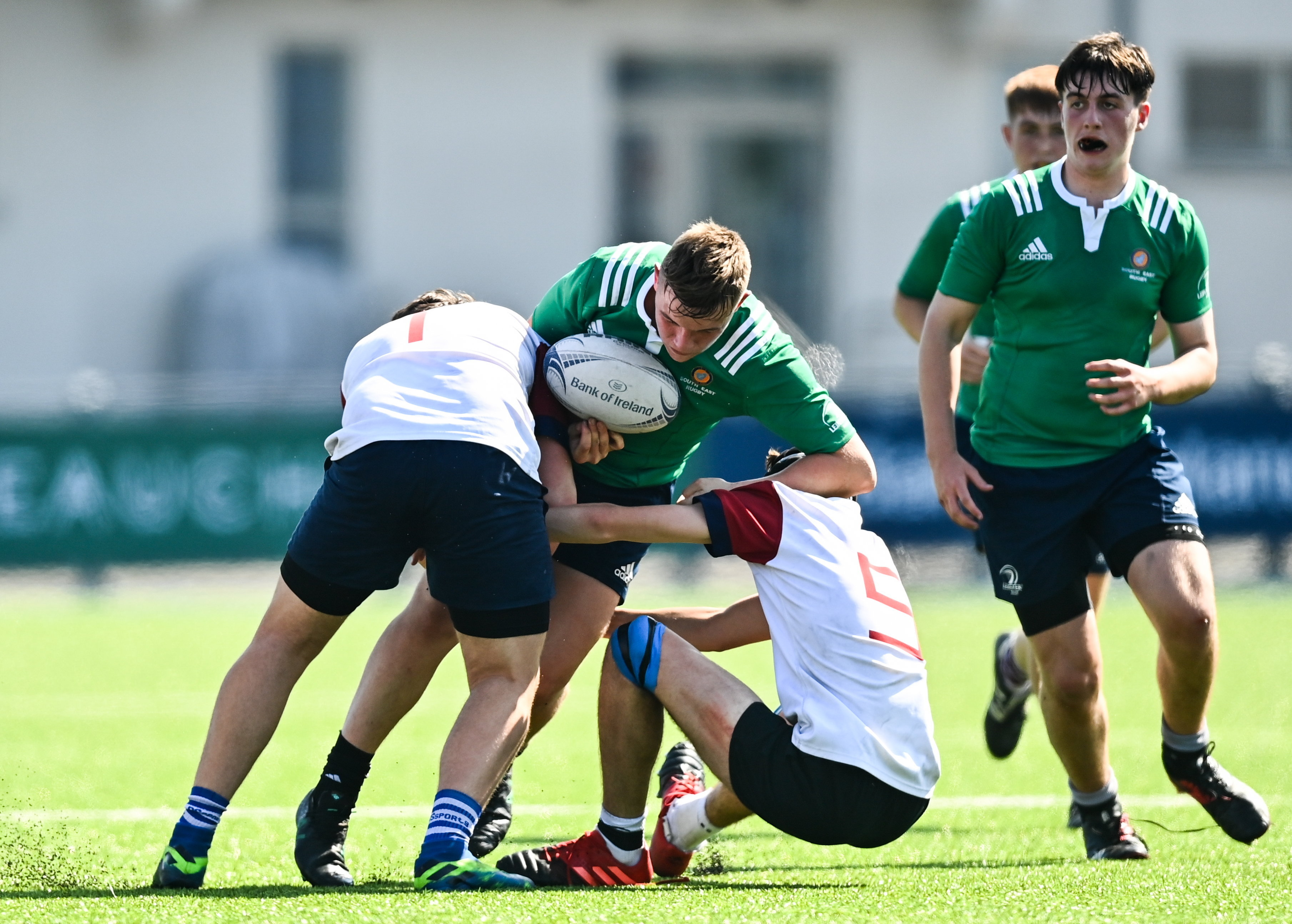 The vigilance of defences at the breakdown was becoming a feature and South-East centre Cillian Moore was the next to stall the ball.

Boyan was twice involved in taking the fight forward with carries in which he simply refused to go to ground. However, the South-East held firm to hold the lead to half-time.

On resumption, the offloading ingenuity of Darragh Brennan was almost rewarded when wing Sean Brennan was hauled down just short of the whitewash. It invigorated their attack, wing Burns testing out South-East’s width and Darragh Brennan bursting over from close range to make it 7-5 in the 38th minute.

Straight away, Hickey sensed the urgency of the occasion, taking off from a tap penalty to get in behind the first line and Moore had the power to make the posts, converting for 14-5 in the 46th minute.

Then, Moore showed his class with an initial break, a second involvement in support and an offload to put James Hughes in at the left corner for Burgess to kick the conversion from the touchline for 21-5 in the 51st minute.

It was a long way back from there for the Midlands. There was no faulting their commitment, despite going further behind to a Burgess penalty in the 54th minute that ultimately closed the show. 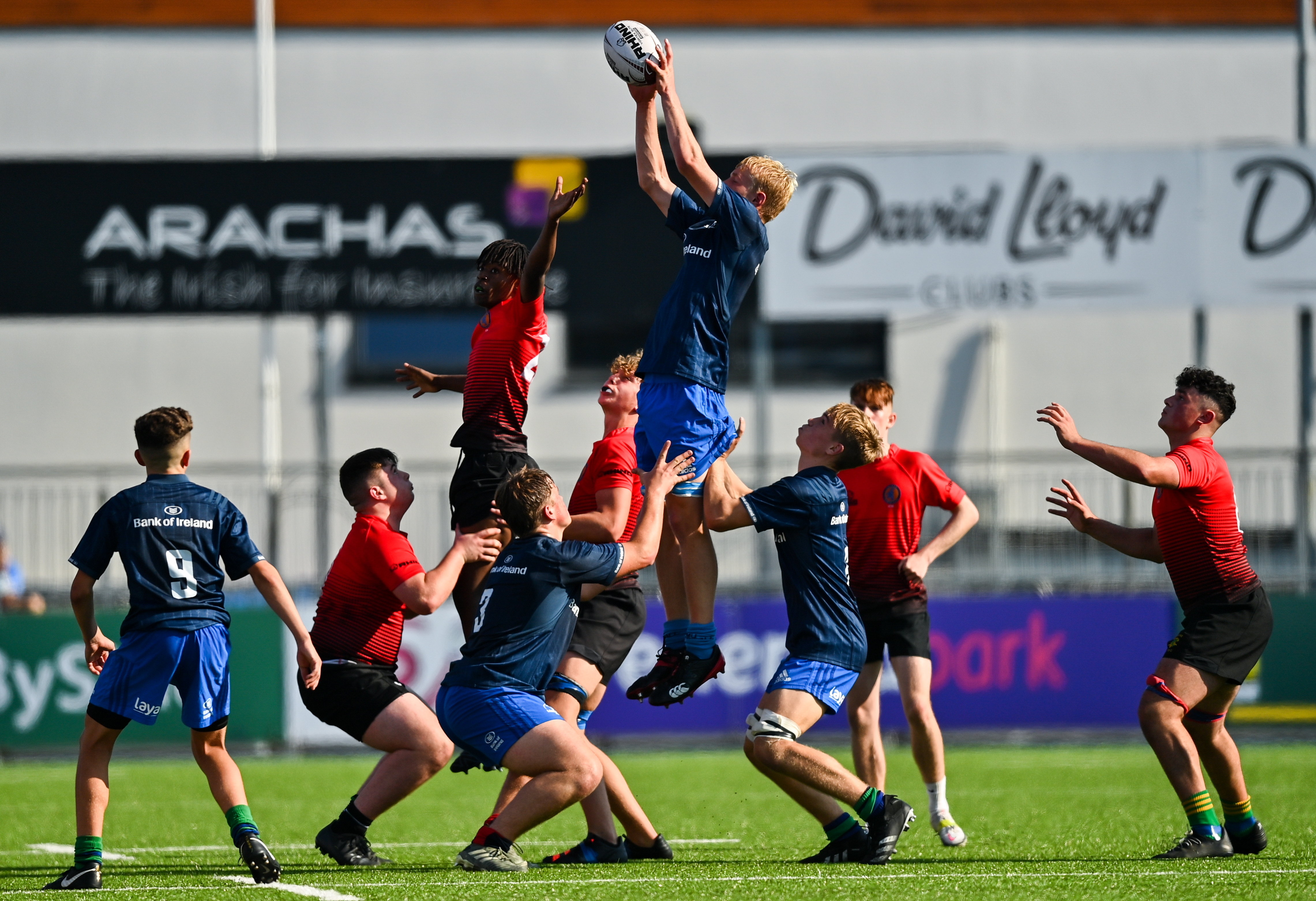 The North-East got their U-17 Shane Horgan Cup campaign off to a flying start at Energia Park on Wednesday, having had a bye week in round one.

There was genuine pace to this game right from the start as Metro probed with variety to their attack, prop Daniel Colgan taking them within striking distance.

However, North-East No 8 Lincoln de Year was prominent in defence, leading the line and getting them out of trouble with a big hit on Ethan Fennell.

Metro had the patience to make the right decision when a penalty came their way in the eighth minute, out-half Will Saunders missing to the left.

Out of nowhere, North-East worked the ball left and wing Lochlainn Harris simply took off, speedily weaving a path to the line from halfway in the 12th minute.

It was just what they needed. Their out-half Paddy Kelly began to work his magic, twice slipping defenders and almost making a second try, the final pass spilling away from Luke Carley. 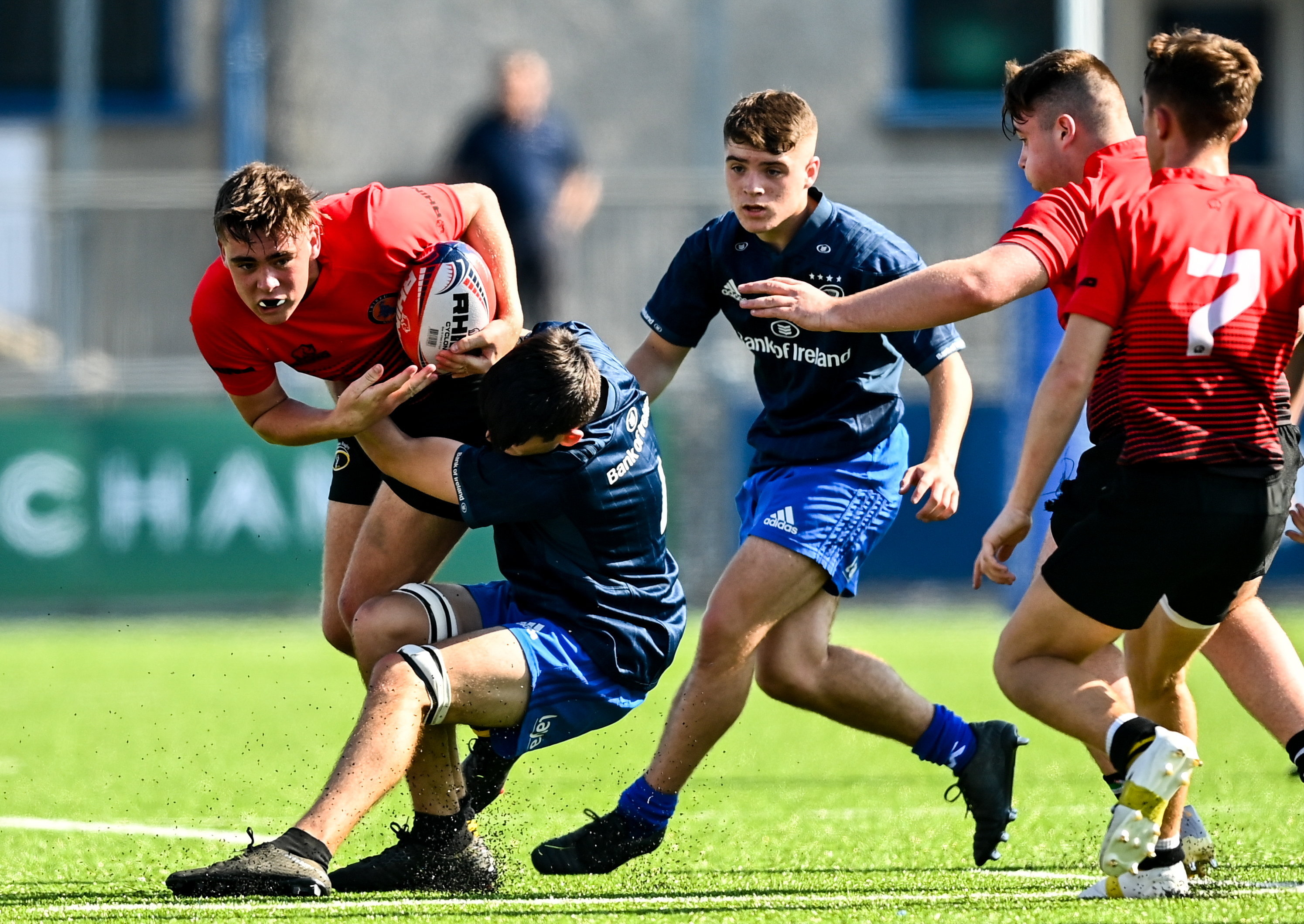 A thunderous tackle by flanker Dylan Hewitt on Mahon Ronan was just what Metro needed to settle down. From the ensuing scrum, full-back Adam Gray put boot to ball for a kick-chase that was won by de Year.

It was becoming apparent that the North-East back division was of the highest order, their running lines and passing quickly turning defence into attack. Fennell was quick to spot the danger when Harris next took possession and full-back Karl Hartfiel was closed down by Michael Barrett in a show of improving organisation by Metro.

Another flowing move led to scrum-half Jamie Byrne sprinting down the left wing where he was undone by a stunning tackle from centre Edgarus Kucinskas. Metro scrum-half Conor Horan took down de Year to delay the inevitable as centre Tim Deering broke for the second try, Kelly converting for 12-0 at the break.

Metro started the second period as they had the first, looking for a score to gain confidence with scrum-half Horan orchestrating their tempo. Fennell was their best option at the lineout. His latest take from Sean Kearney’s throw came to nothing as the North-East defence swarmed to snuff out the danger.

The sight of wing Luke Ingle and second row Guilhermo Neto carrying tacklers with them in contact was encouraging for Metro. But, Kelly pulled the strings for the third try, skating through a hole in midfield and angling a kick into the hands of Oisin Hegarty, who had Alex Hermitage at his shoulder for the try in the 45th minute. 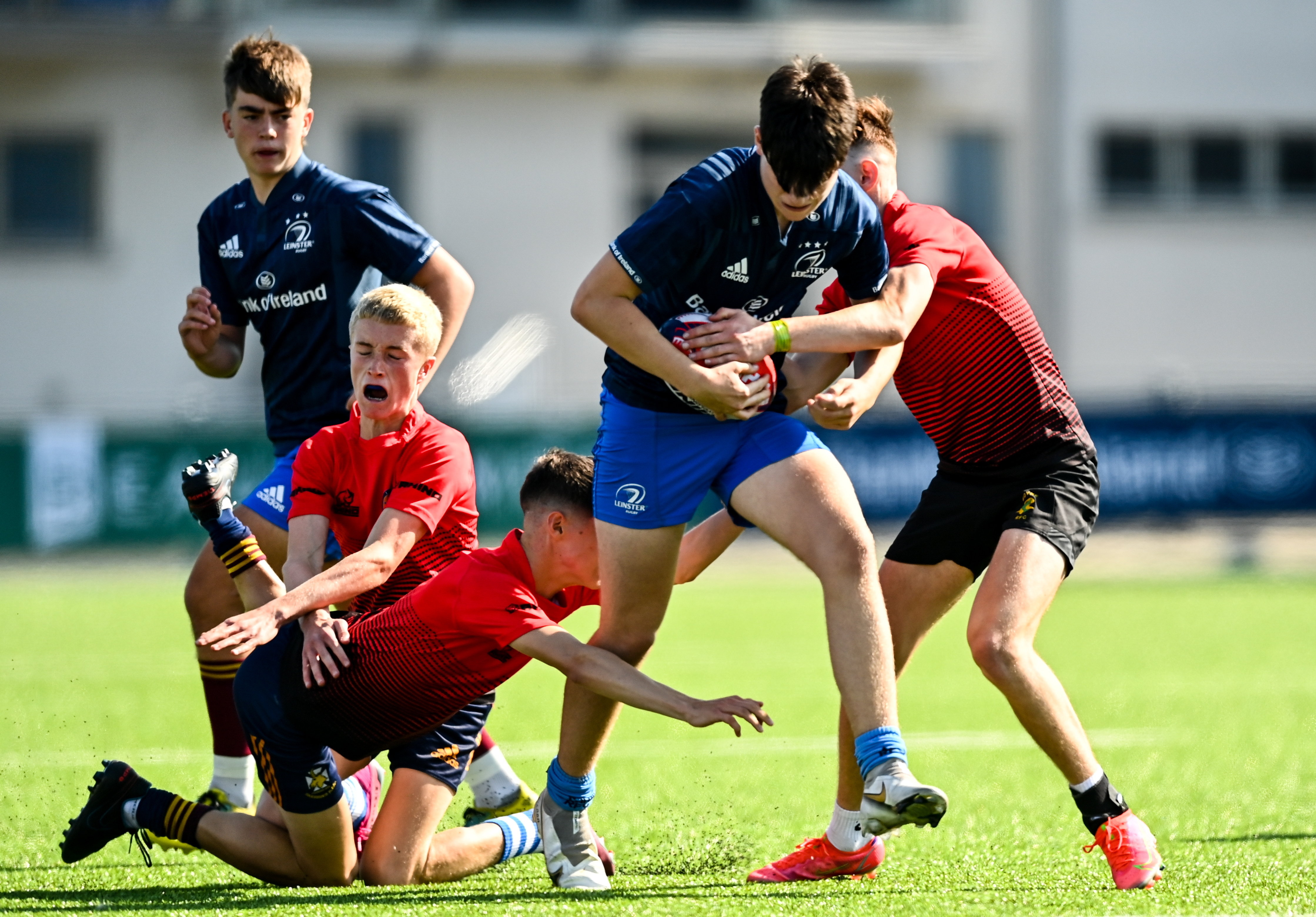 The soaring Fennell took yet another lineout and hooker Kearney sped away from the side of a maul to ground the ball in the 49th minute.

A strike against the head at the scrum opened the way for Metro centre Gavin Keane to get over without getting the ball to ground in what was turning into a tale of two halves.

Another breakthrough by Metro would make it interesting and North-East’s Luke Carley was called on to make a vital tackle.

They just didn’t have the cutting edge to reward their solid approach play, de Year bursting away from deep inside the 22 to provide breathing space.

Back Metro came, full-back Gray bundled into touch by a double tackle on the 22 in their final attack.

The third round of the U-17 Shane Horgan Cup will take place on Thursday, 28 October, in Energia Park, where the Metropolitan Area will face the North Midlands Area and the South-East Area will take on the North-East Area.