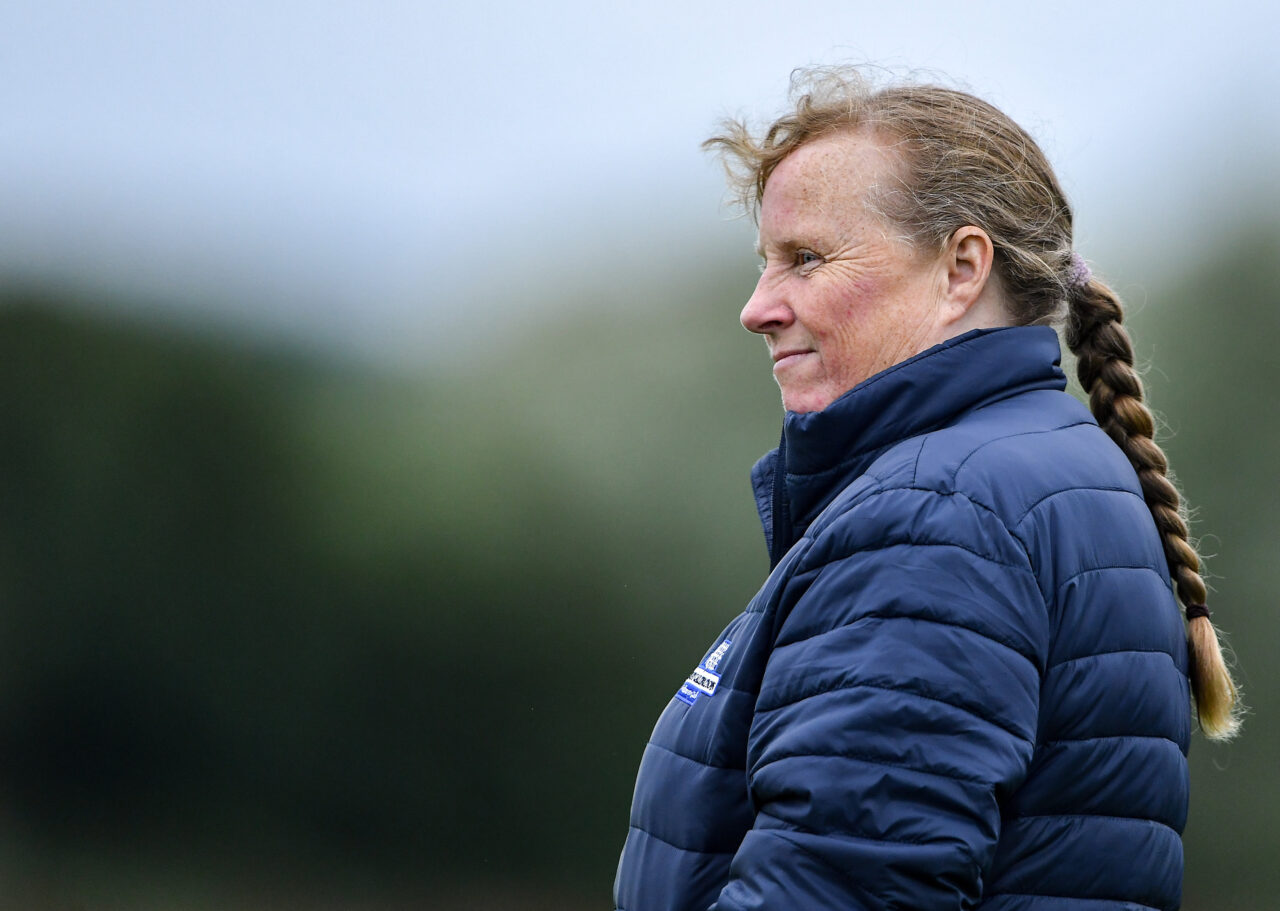 As the Vodafone Women’s Interpro Series comes sharply into view in the next few months, Leinster Rugby will focus on some of the unsung heroes making the girls and the women’s game tick across the 12 counties of Leinster.

It was an ordinary Wednesday night on September 26th. An extraordinary one for Samantha Wafer.

She would have had her loyalty divided were it not for the fact she was the Team Manager of South-East in the Bank of Ireland Leinster Sarah Robinson (U18) Cup in Carlow.

For, older daughter Aoife, the Ireland international flanker, was already cutting her coaching teeth with the Metro forwards and Orla was packing down at number eight for South-East.

Samantha is one of the busiest volunteers in the province as a coach to the South-East Lions, as a Manager of the South-East and Leinster U18s and as a loving mother to her two daughters of the back row. 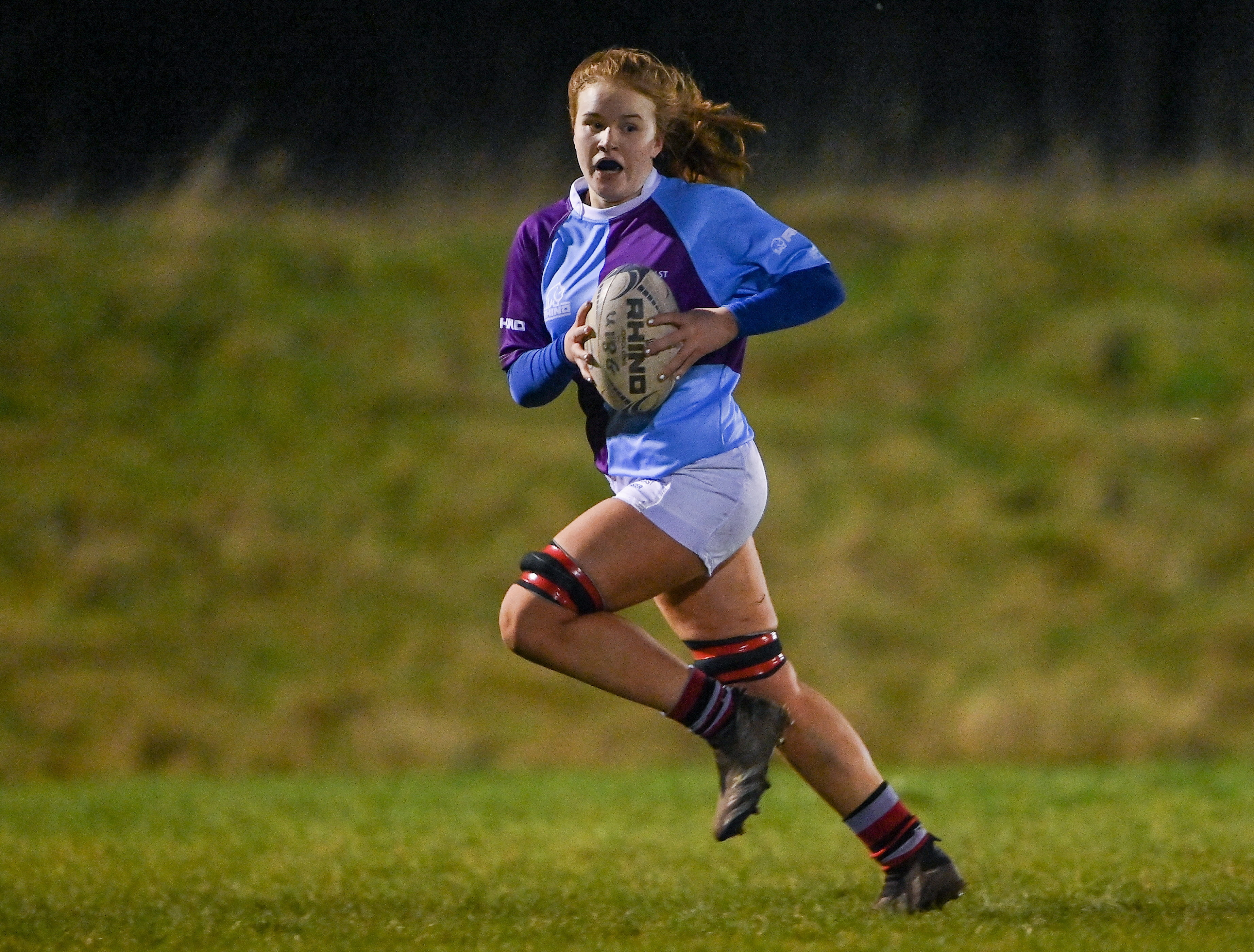 “I would say rugby is central to our lives. But, it certainly didn’t start out that way,” she says.

Sixteen years ago, Samantha and Aidan Wafer took their sons Michael and Sean down to Gorey Rugby Club to try something new.

“We were just parents on the sideline. A shout went out for help in the club’s kitchen for the after-match hospitality. That is where I started.”

Sons Michael and Sean made their way through the system at Gorey, Sean eventually playing for the Leinster U18 Clubs in 2017.

In the beginning, Samantha was not inclined to give in to Aoife’s wishes to follow her brothers into the game, citing “the roughness” as a reason to stay away from it.

“Aoife wouldn’t let it go. She kept at me and, one day, I remember her saying to me, ‘wouldn’t I be better out on the pitch rather than standing here in the cold?’

“I realised this six-year-old was making sense. The next session, she was out on the pitch with the lads and that was it.

“Every child should be encouraged to take up sports. It doesn’t make a difference which one it is. They should have a wide base, try everything and find something that they love.”

A while later Aidan, Samantha’s husband became the minis co-ordinator.  The Sunday morning ritual for six years was to either be at the clubhouse preparing for training, playing in blitzes or travelling to other clubs.

“I had no background in rugby. None. We were a pure GAA family. Aidan is a Ballygarrett Realt Na Mara man. I would have been a Starlights, Rapparees girl in Enniscorthy.”

From the kitchen to coaching and up to managing, Samantha has not lost sight of the impact of the game.

“Rugby is definitely at the heart of our lives. Sometimes, you might even think it has taken over our lives,” she admits.

“There used to be a time when all our five kids, Michael, Sean, Aoife, Conor and Orla were involved in youths rugby.

“You would go to the school gates on a Friday and you would hear other parents, ‘God, it is great the weekend is here, isn’t it?’

“‘I have to get to four or five different matches that are being played ‘God Knows Where’ and I’m thinking ‘the weekend is here. Oh my God!’” she laughs.

There came a point when Samantha decided to take her interest inside the white lines to sample the game that had captivated her children.

“A young fella Tommy Martin came into the club kitchen one day where there was a crowd of mammies making sandwiches for the teams.

“He wanted to put up a poster to start a Women’s team. It didn’t matter what age they were or how fit they were, he would get them ready to play.

“When we suggested we might show up, he laughed at us. That was like waving a red flag at a bull. I didn’t want some young whipper-snapper telling me I couldn’t do something.”

But, it didn’t go down well with everyone.

“I didn’t tell any of the kids I was taking up rugby. I went training. I didn’t need the defib, or anything else, to get me through the session. I came home, boots in hand, covered in dirt, beaming

“He was at that stage when parents were an embarrassment. He was disgusted. I said, ‘better again, Michael, we’re training on the same night, so we can carpool.’”

Samantha was hooked and it wasn’t long before sons Sean and Michael were behind a new passion. 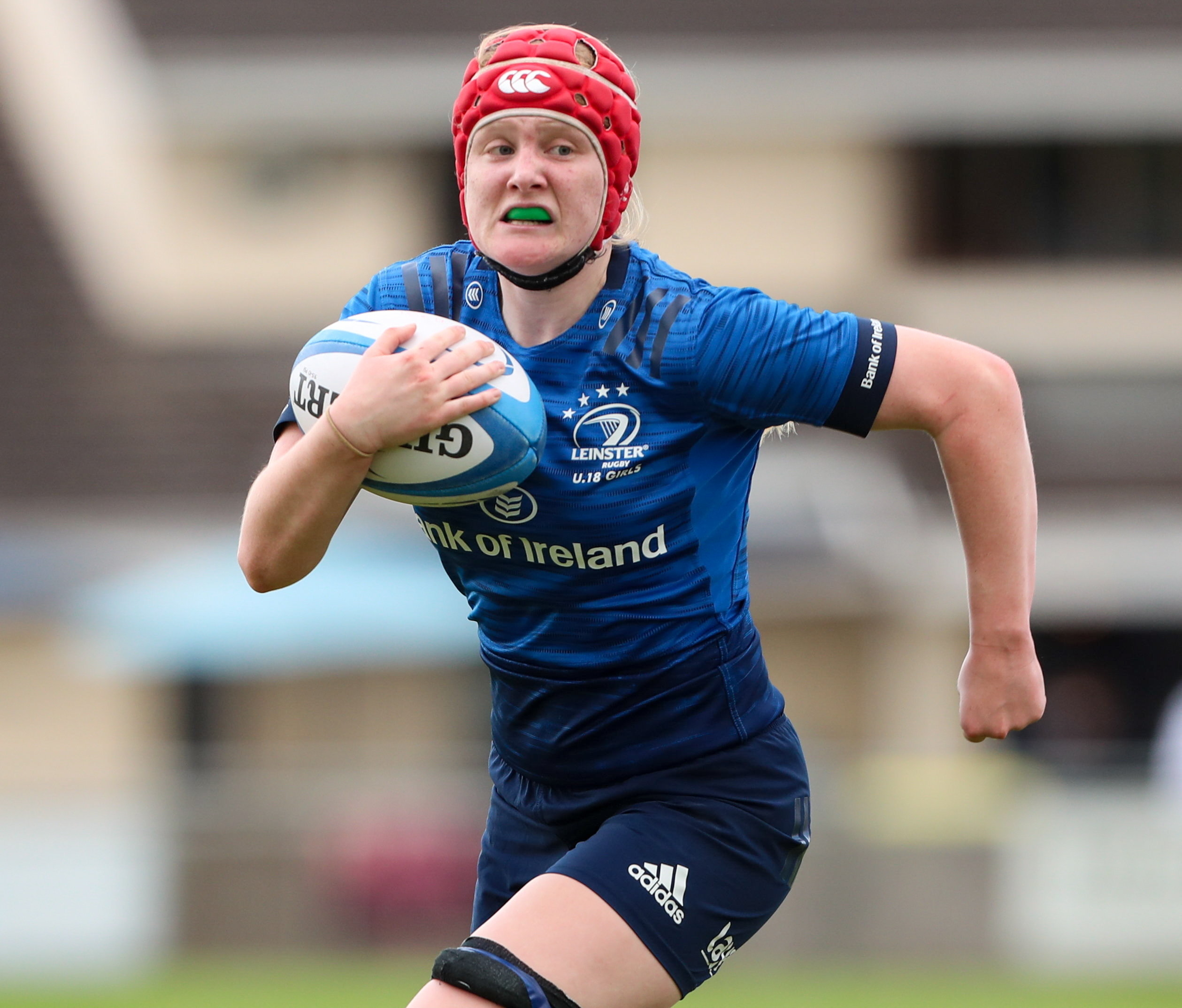 “I do remember coming in after the first match, sitting down and realising, ‘now, I know why the kids love this game so much.’

“Would you believe, when I took up rugby at the age of 40, it was the first team sport I had played in my life.”

Almost a decade later, Samantha hung up the boots for good. By then, she was deeply embedded in volunteerism, not just at Gorey.

“Even though we were a GAA family, as children, we were taken to all matches.  The boys were encouraged to play, but the girls were left on the sideline. We weren’t encouraged to take part. I made a promise to myself that our girls would be given every opportunity to play sport.”

Samantha stayed true to that promise. In time, rugby became the family focus.

“I just love everything about it. It doesn’t make a difference what shape you are or how fit you are, there is a place for you. It is the social aspect. It is everything about.

“Even now when I am out training the girls, I think of taking the boots out of the press again. Reality soon sinks in and I know that won’t happen,” he says.

In 2014, when Aoife had to leave the boys team and play with the girls, Samantha decided to dabble in coaching.

At present, she coaches the South-East Lions U18s, an amalgamation of Enniscorthy and Wexford rugby clubs, for one night a week.

She is the Manager to the South-East squad which competes in the Sarah Robinson Cup, an area competition that serves as a testing ground for those aiming to wear the blue of Leinster and even green of Ireland.

Physically, that involves a one-hour drive to Carlow, two hours of training and the return journey for one night a week.

On the Leinster front, she is the Team Manager of the U18s which entails a heavy workload from March to October, including administration, trials, serious summer training for three days-a-week in The King’s Hospital school, ranging from the beginning of July to the middle of September. 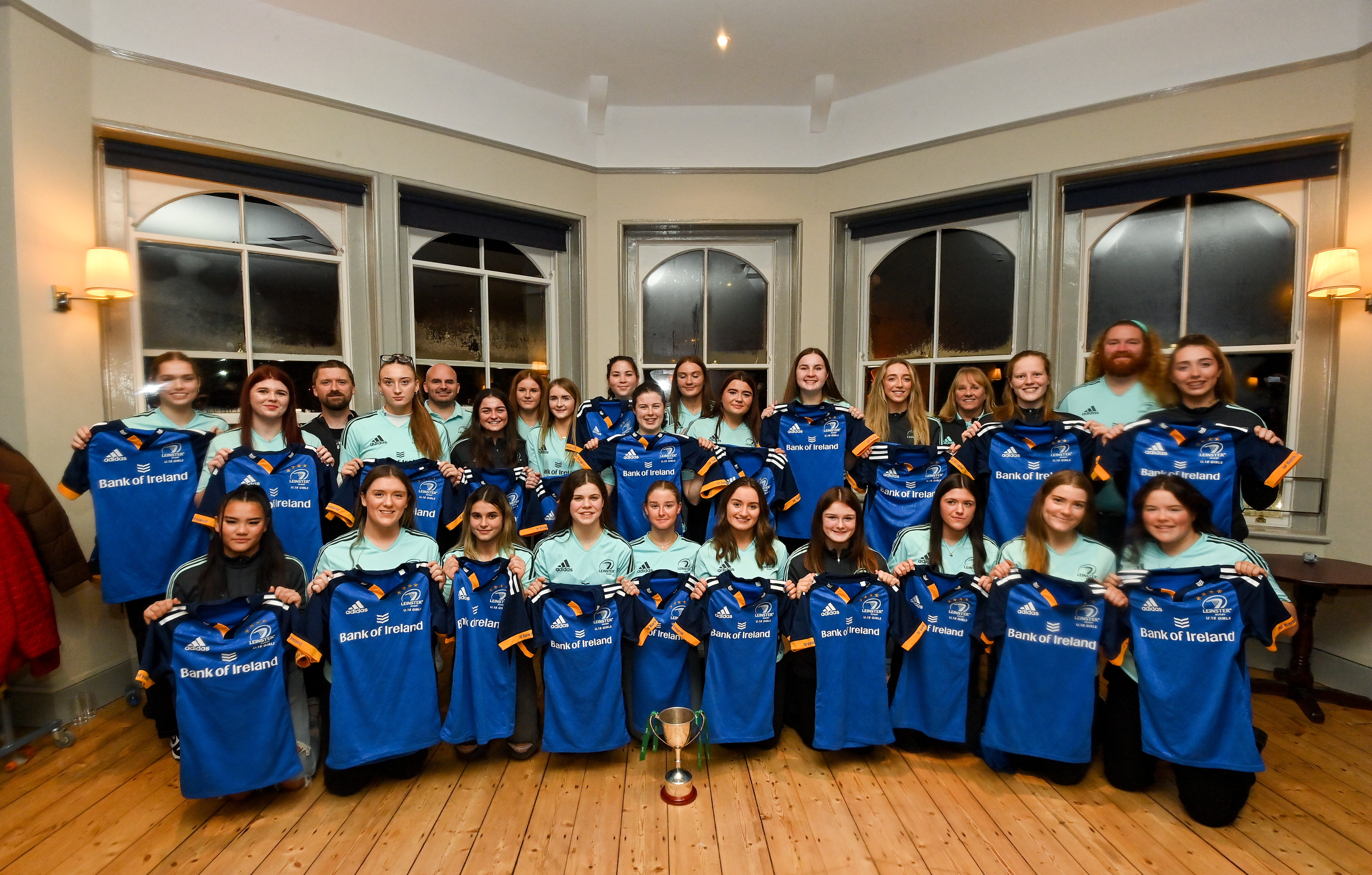 “It starts out as a group of 40 and this is whittled down to around 30 when all the preparation is complete,” shares Samantha.

“You spend so much time with the girls on the South-East and the Leinster panels that you get to know them, you do develop a connection with them.”

The administration workload is substantial and, perhaps, the ultimate reward comes from the international recognition won by Aoife and Orla.

“I have nothing to do for Ireland. I am just a mammy on the sideline, trying to get to all the matches.”

It just so happened that Aoife and Orla made their Ireland debuts on the same weekend in April.

Samantha flew over to Scotland to watch Orla play for the Ireland U18s against France and caught an early flight to join Aidan in seeing Aoife make her senior debut off the bench against Italy.

It is at special times like that when the reward is worth all the commitment.