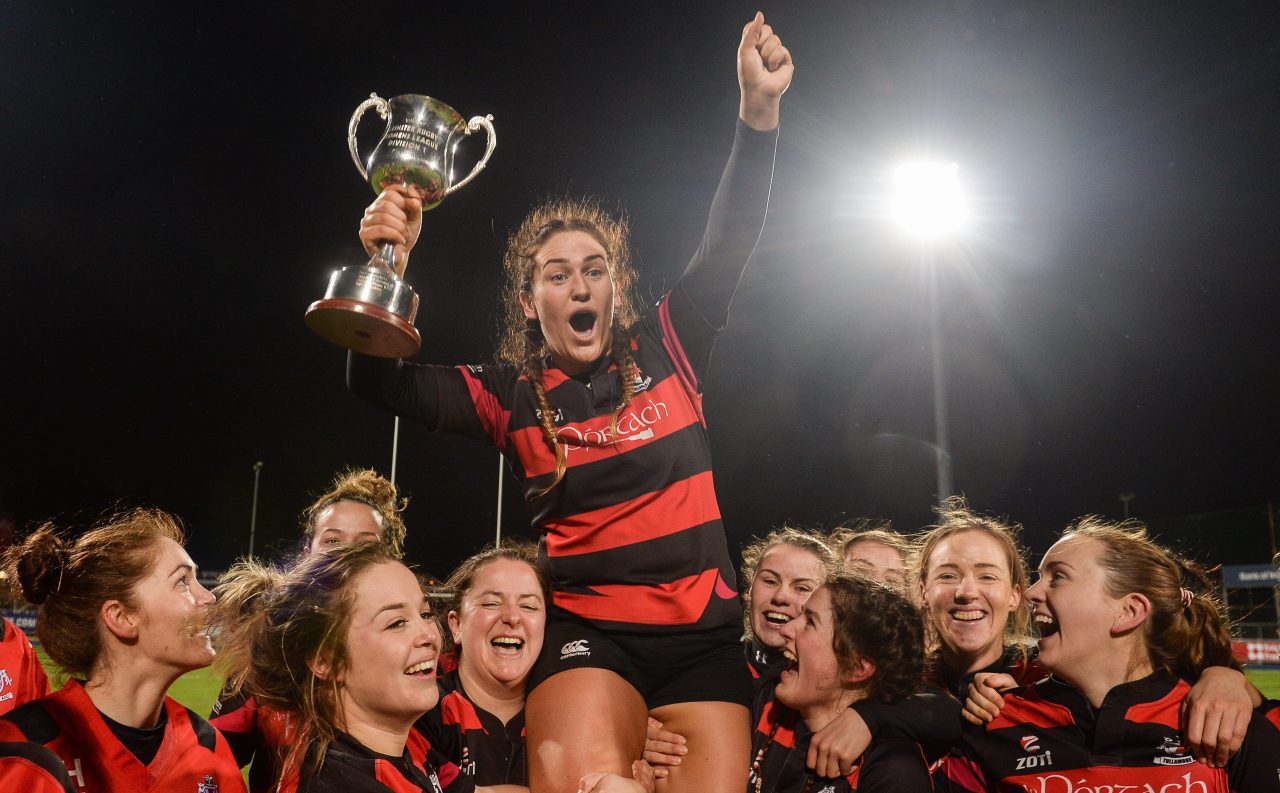 The Bank of Ireland Leinster Women’s League finals fell afoul of the rain over the weekend with Saturday’s four finals moved to St Michael’s College and Donnybrook Stadium due to the pitches in Old Belvedere being waterlogged.

Despite the adverse conditions, Finals Day went ahead with spectators treated to four well-contested games throughout the course of the day.

The poor weather on Saturday didn’t dampen the determination from either Wanderers or Dublin University to claim the Division 4 title.

The first half started with good pressure from Wanderers, Magella Cox scoring the first try of the day in the eighth minute, converted by Ruth Murphy for a 7-0 lead.

The score remained the same for the next 20 minutes with both sides pushing hard. 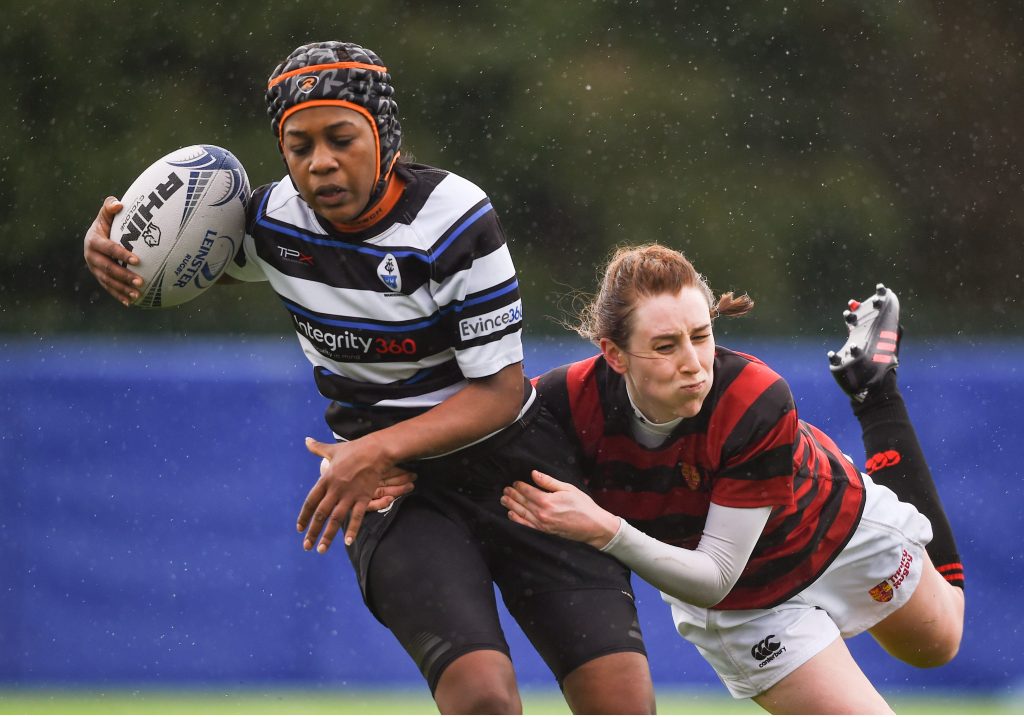 Dublin University missed an opportunity to get points on the board when a penalty fell short.

Wanderers made them pay for it when Lena Klochlo scored their second try soon after, extending the lead to 12-0.

Dublin University continued to drive forward and were rewarded with a try, but their comeback was knocked back as Wanderers got their third of the day to leave the score at 17-5 at half-time.

The two sides battled it out under heavy rain in the second half, with Dublin University defending hard again. 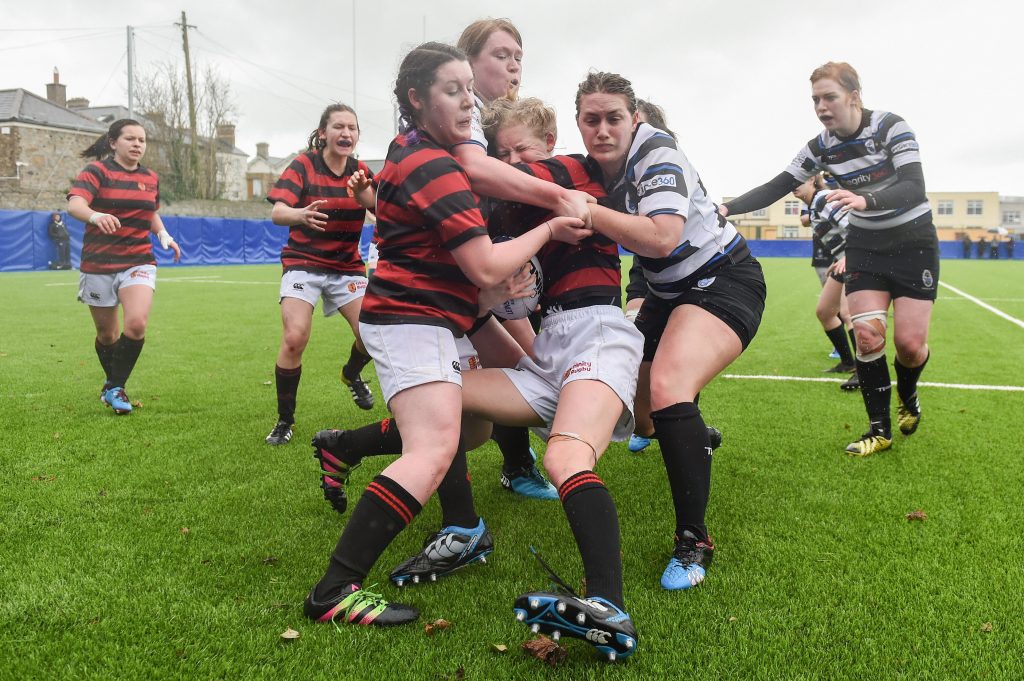 The DUFC ladies eventually worked their way up the pitch into Wanderers’ 22, however the ball was turned over and, after a great run from Wanderers full back Fran Schier, Cristina Haering scored their fourth try of the game.

Dublin University weren’t about to give up, however, and their endeavour was rewarded with a penalty try, the result of a high tackle.

The conversion was short, meaning the margin was 10 with time running out. 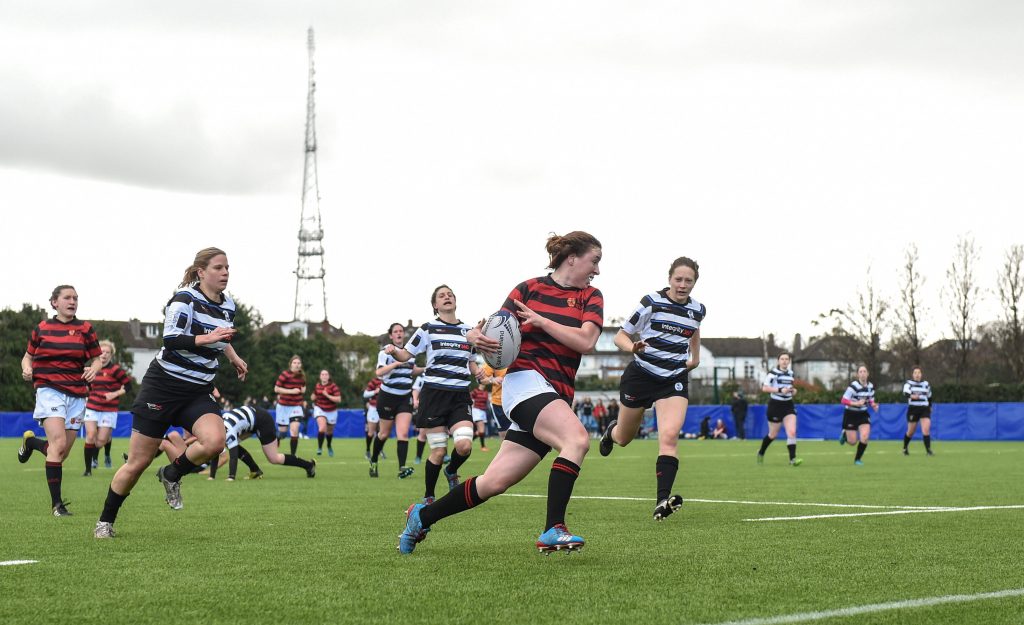 Three minutes before the final whistle, Precious Jere scored the last try for Wanderers and the conversion from Jessica Kickham left the final score to 29-12. 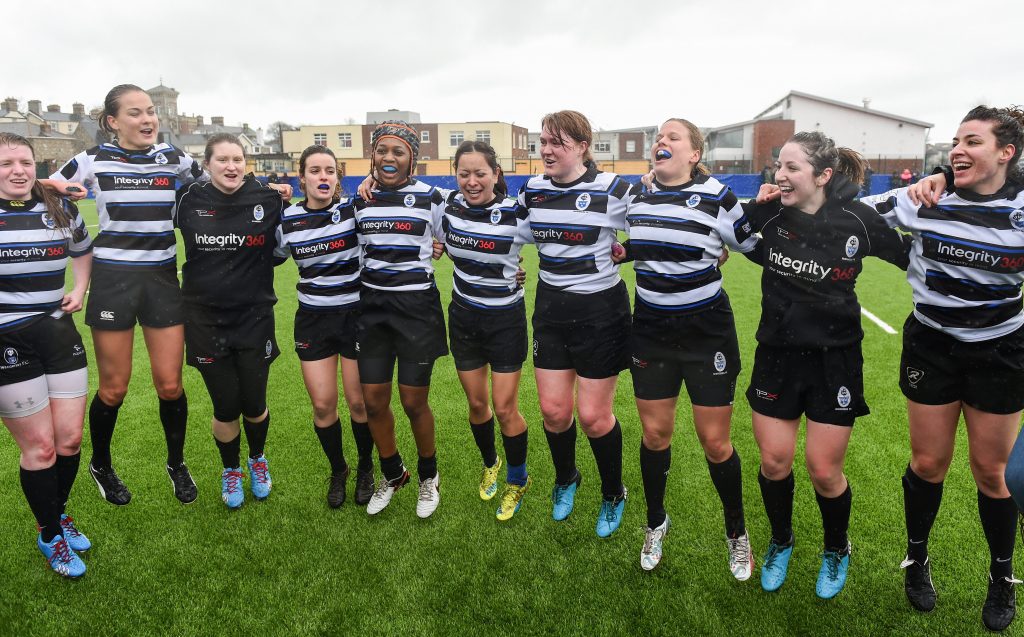 Garda/Westmanstown dominated the early exchanges of the Division 3 final, creating a number of chances but failing to convert any of them into points.

The scoreboard was untroubled for the first 30 minutes until three quickfire Wicklow tries before the break.

The first came off the back of a driving maul, winger Niamh O’Leary bagged the second only a few minutes later, followed by Meagan Parkinson scoring off an interception, which was converted by Ciara Patrick. 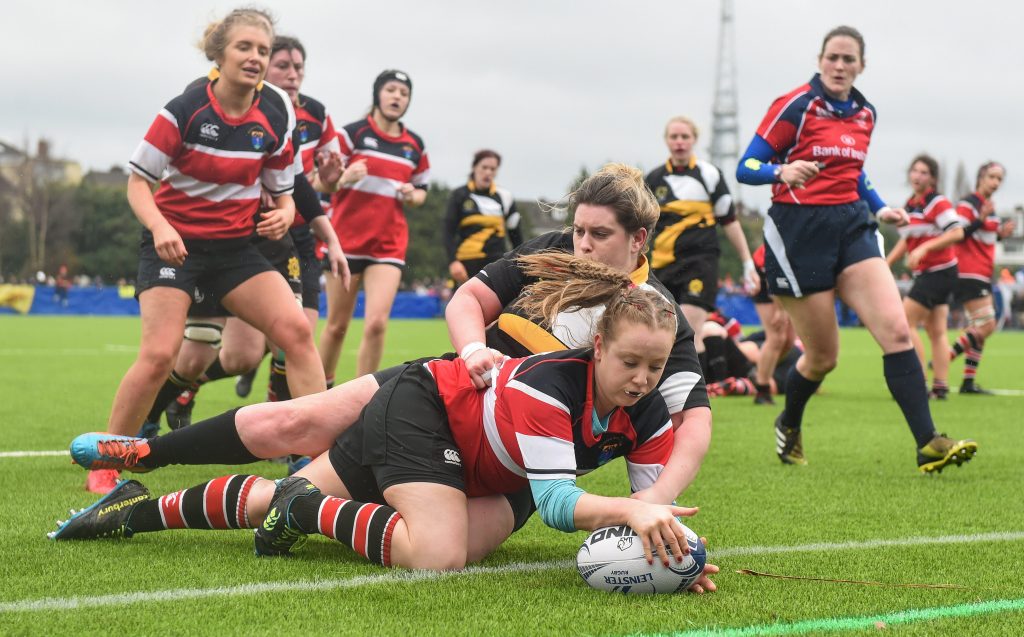 Westmanstown were awarded a penalty before the end of the half, converted by Ciara McDonnell, to get some badly needed points on the board.

Wicklow’s dominance continued in the second half with Patrick dotting down for their fourth try, which she also converted.

Wicklow were starting to pull away. 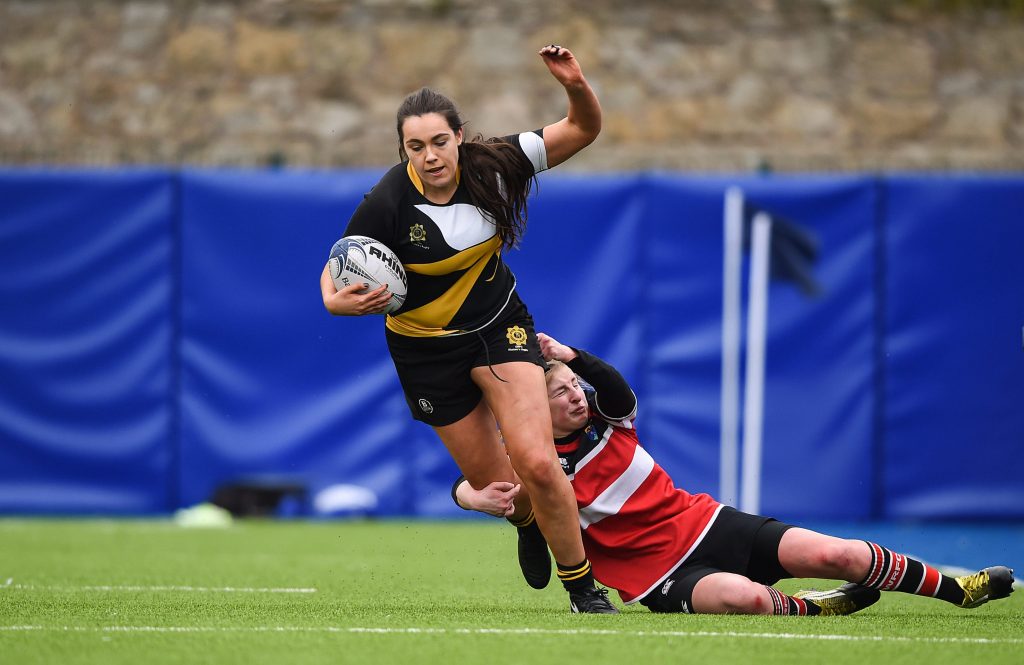 Westmanstown’s Ciara McDonnell scored and converted her side’s first try after a number of phases finally broke the Wicklow resistance.

The surge came too late, however, and Wicklow were deserved winners of the Division 3 final, 24-10. 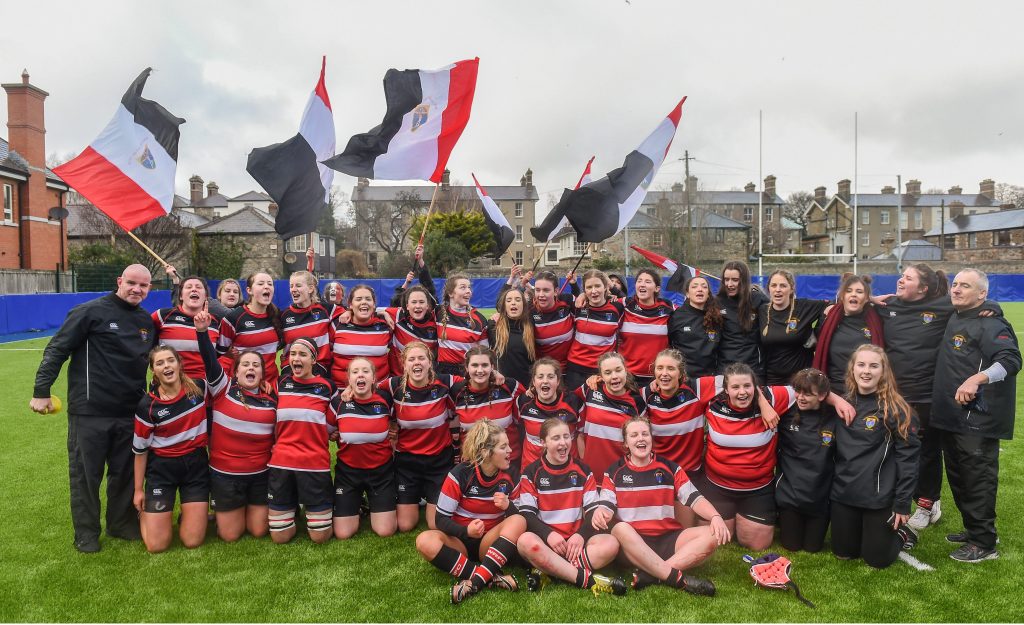 The Division 2 final kicked off in heavy rain which continued throughout the game.

CYM, last year’s beaten Division 2 finalists, made the stronger start, but they would have to wait until the 25th minute for their first real chance – a penalty attempt that went wide of the posts.

There were many more chances in the first half for CYM but Tullow’s defence was solid, with a standout performance from centre Alex O’Brien, to keep the things scoreless at half-time. 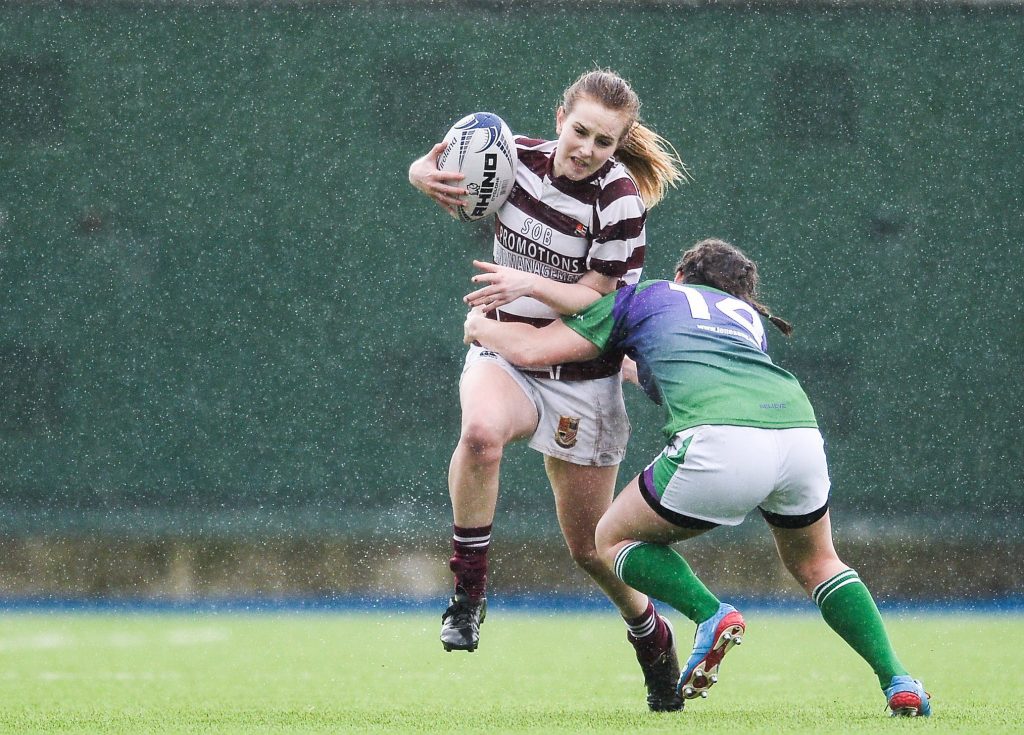 Tullow were dominant for periods of the second half but they lacked a finishing touch.

Despite both having their chances, the game remained 0-0 at full-time and extra-time was needed for a winner to emerge.

This brought about a sense of urgency to the action on the pitch.

Eventually CYM broke the deadlock with an unconverted try from Brenda Healy at the end of the first 10-minute half of extra-time. 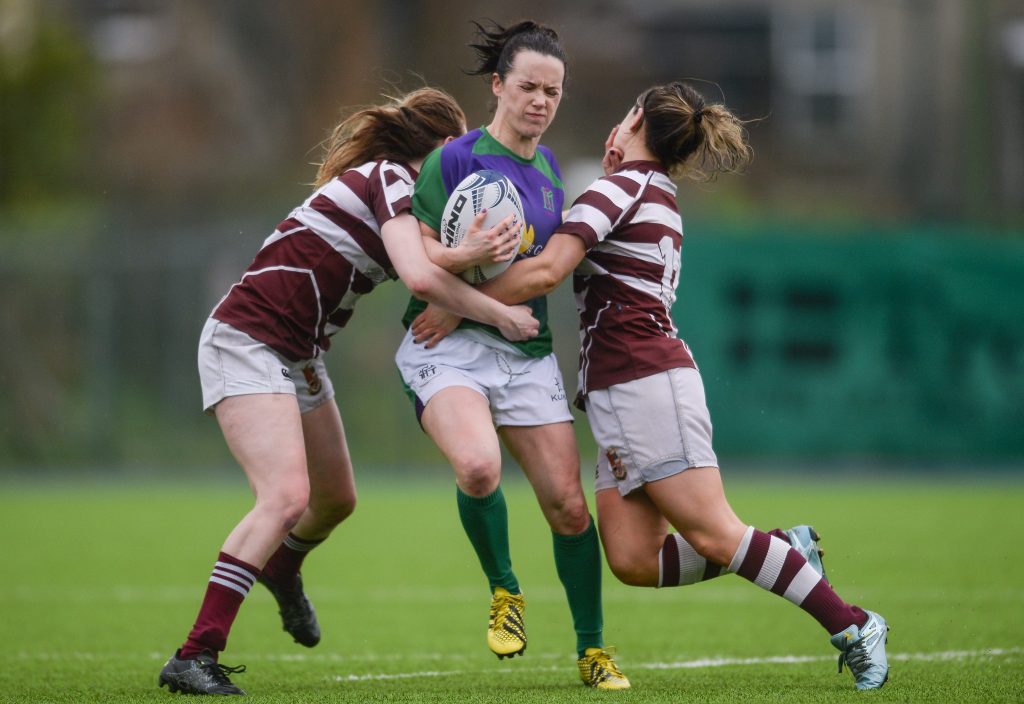 The blow was doubled for Tullow when O’Brien was stretchered off for treatment shortly after the restart.

CYM’s defence stood fast and they closed out the game to win 5-0 after extra-time.

Player of the match could have gone any one of three players. CYM’s Hannah O’Connor and Promise Chapwanya both put in impressive performances but the award went to Tullow’s Alex O’Brien who was excellent in both defence and attack. 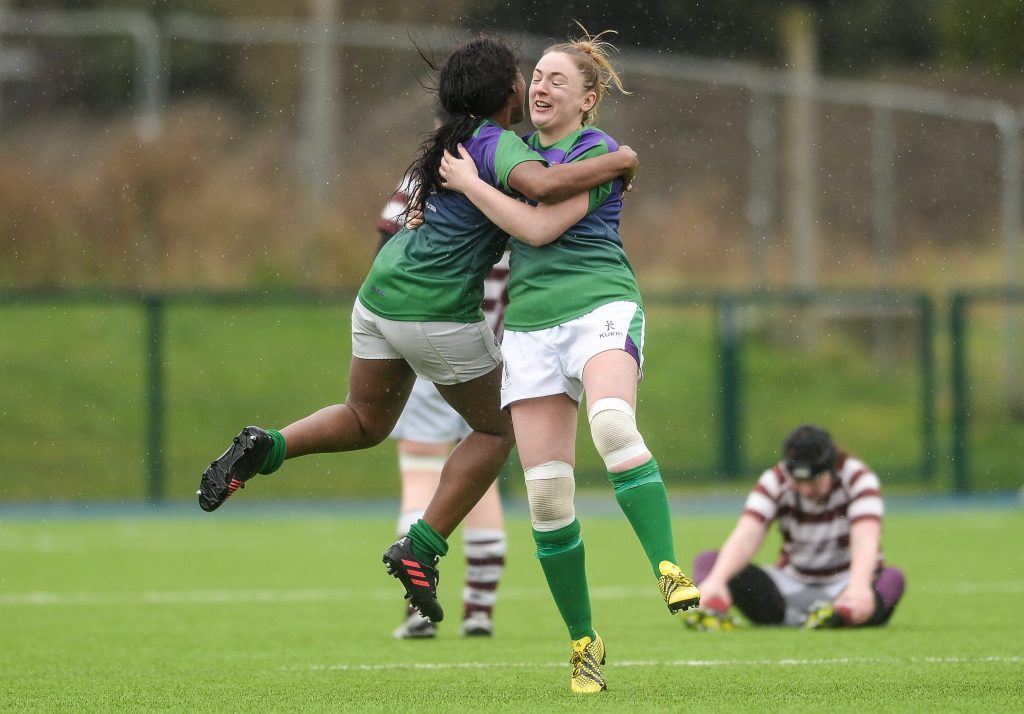 The final game of the day kicked off on the main pitch in Donnybrook Stadium with Tullamore, unbeaten in the league going into the game, taking on Rathdrum.

With the coveted Division 1 title and potential promotion to the AIL up for grabs, there was a lot to play for in this game. 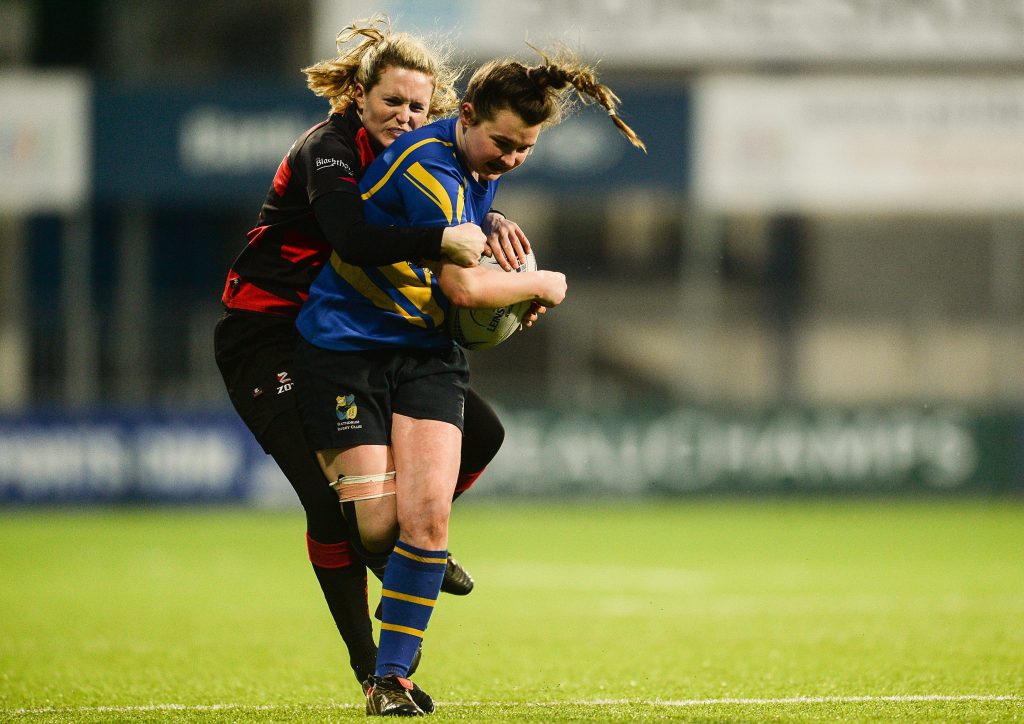 The rain, which persisted throughout the other three finals, finally broke giving the teams a chance to play a more free-flowing game under the lights in a cold Donnybrook Stadium.

The first points of the game came in the 30th minute from the boot of Rathdrum’s Mo Dowling when Tullamore were pinged for not rolling away.

Dowling made it 6-0 soon after with her second shot at goal. 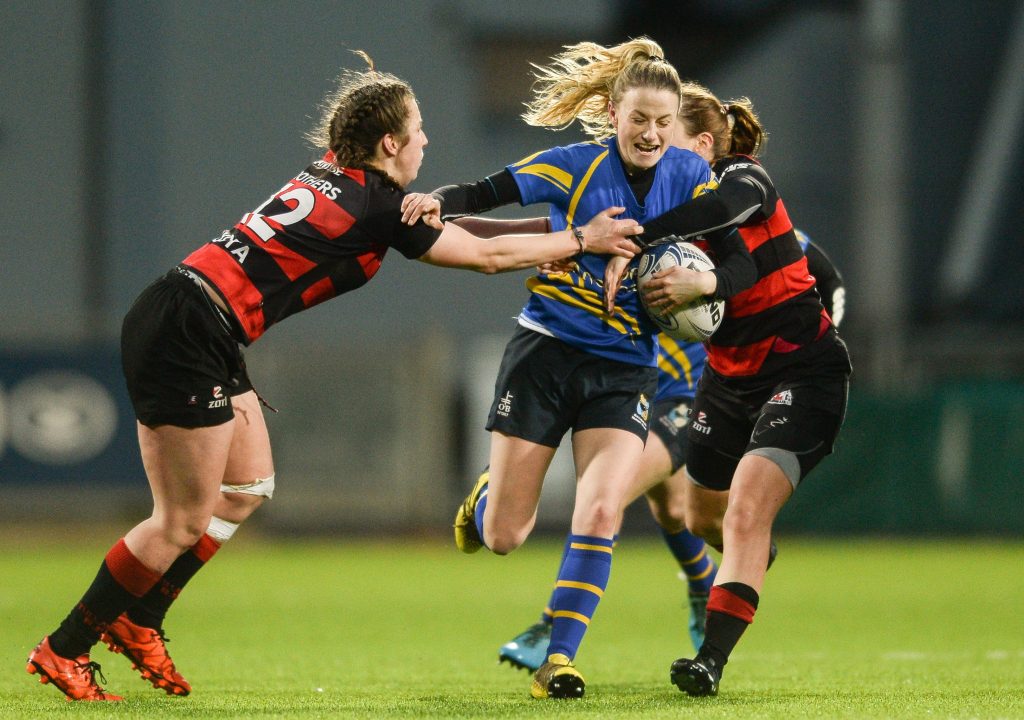 Tullamore had few chances in the opening 40 minutes and rarely ventured into Rathdrum’s half of the pitch, but they came out with vigour in the second half.

After several phases on the Rathdrum try line they were eventually rewarded when winger Caroline Ahern dotted down in the corner, Pauline Keating’s conversion attempt falling short of the posts.

Tullamore were also reduced to 14 when replacement Nichola Fryday was carded.

Rathdrum opted to take the penalty and extended their lead to four points. 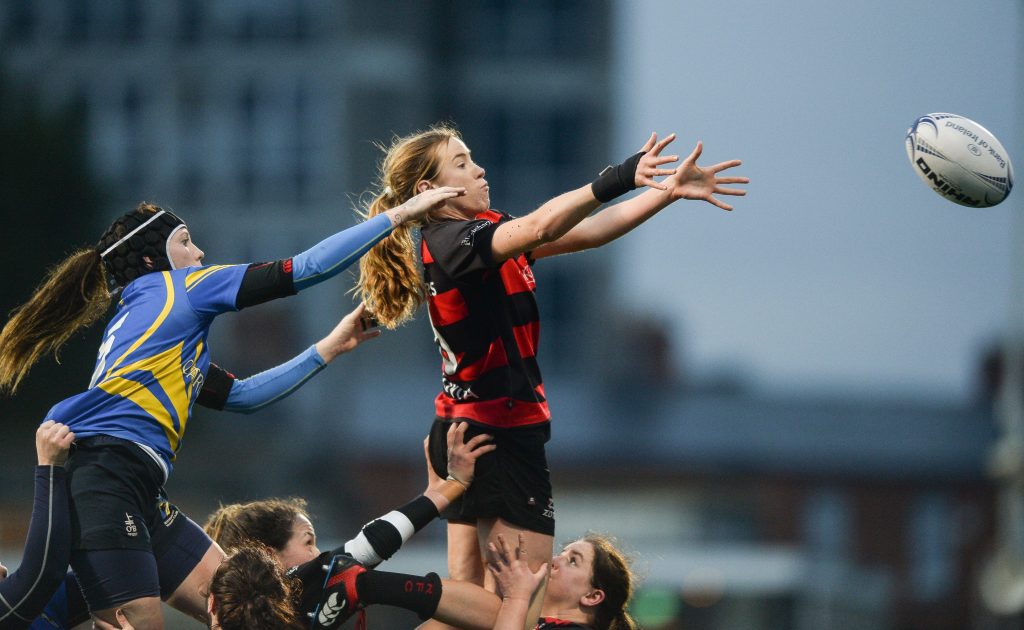 The teams continued to test each other’s defences in the last quarter of the game but it was Tullamore that struck when Roisin Feighery dotted down from the back of a maul.

Despite the conversion going wide Tullamore were in front for the first time in the game, the score now 10-9.

With full-time approaching fast, Rathdrum knew their chance to grab victory was slipping.

They made one final push, working their way into Tullamore territory. When the referee awarded a penalty, Dowling opted to kick for the corner.

Rathdrum worked a great driving maul and moved through a few phases, but they were turned over and Tullamore kicked the ball into touch to clinch the Division 1 title. 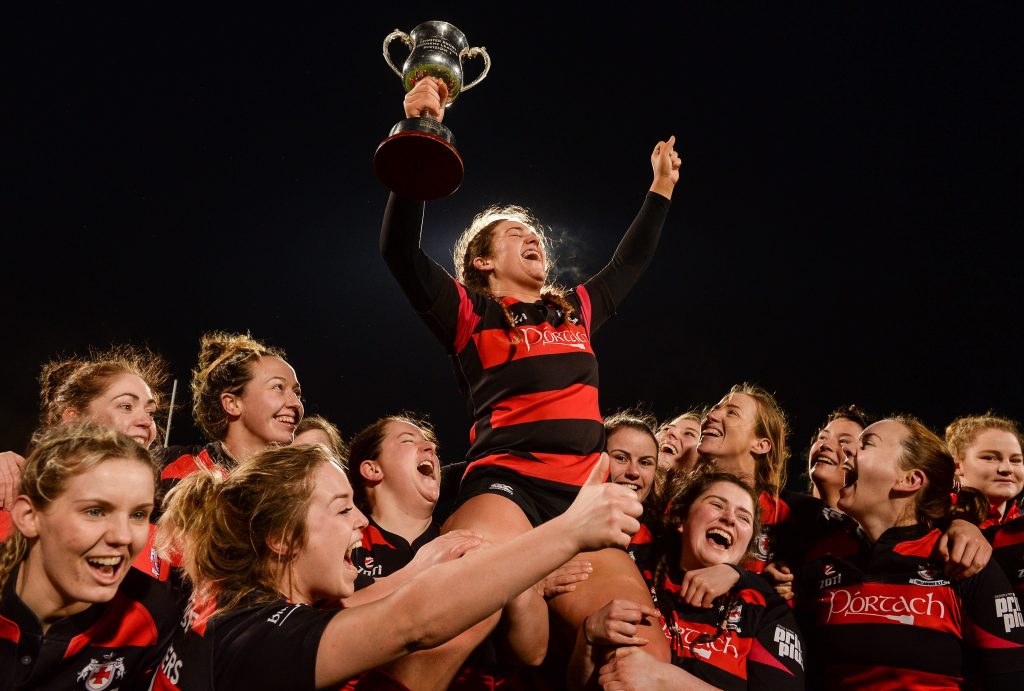