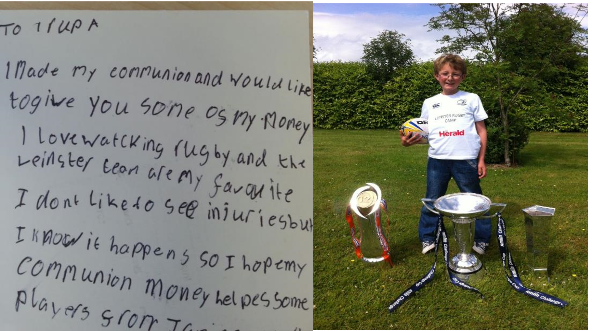 At the beginning of this month, IRUPA released a picture of an extremely generous contribution they had received from a young boy who had just received his communion money…

Jamie Carroll (aged 8) had stated in a letter that he wished to contribute his communion money to IRUPA for any injured players that could benefit from, due to his love of watching rugby and in particular the Leinster rugby team.

To thank Jamie for his incredibly generous gesture, we awarded Jamie two places to the forthcoming Herald Leinster Summer Camps and gave him a first-hand look at the Amlin, PRO12 and the B & I Cup trophies which the team have won over the past season. Also, Jamie was presented with a rugby ball, signed by all of his heroes within the Leinster team.

When asked why he had contributed the money to IRUPA, Jamie replied that, “I thought it would be nice, because I love watching rugby, particularly Leinster”.

Currently, Jamie only plays rugby for fun in his garden with younger brother Harry. However, with the excellent level of coaching he will receive at the upcoming Herald Leinster Summer Camps his parents are hoping to join his local side (Portaoise) on the back of this in the near future and Jamie hopes someday to wear the Leinster blue himself.

For more information on the Herald Leinster Summer Camps, or to book online, follow the link below: www.leinsterrugby.ie/camps