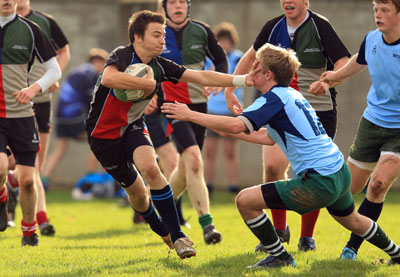 Mid-term holidays saw the process towards selecting next year’s Leinster Youths take a significant step. A rugby blitz, comprising of under 17 teams from the five regions, was held in Greystones RFC…

While the coaches of the various areas are at pains to point out that this is not a ‘competitive’ event, but rather an opportunity to assess all the players present, there are obviously some bragging rights to be attained.

The format for the event saw the teams play each other in a 20-minute game with no breaks and no conversions or penalty attempts at goal. This means the ball is in play for greater periods and thus the players are faced with far more decision making, bringing out their individual skills and more instinctive play.

The Branch’s elite coaching staff observe the matches on a rotational basis, which ensures they see all the players involved. While the object of the exercise, from a Branch point of view, is to try and identify the best of the best, the players generally put aside personal ambition and commit so much to the good of their team that some really competitive matches ensued.

Following the matches, the Player Development staff met to compare their assessments and with the assistance of their input, the various coaches of the regions will cull their development squads to approximately the ten or eleven players that are considered best placed to advance to a Leinster Youth working squad next March.

By reducing the size of the Under-17 squads the CDOs and their assistants will be better placed to hone the players’ skill and monitor their conditioning work.

The Branch would like to thank Greystones RFC for the use of their facilities and St John’s Ambulance staff who assisted on the day.