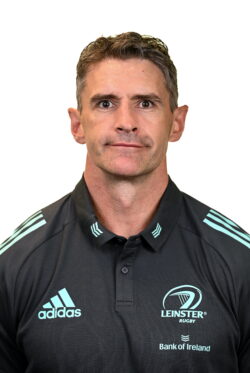 Trevor is the Provincial Talent Coach, a role which sees him support young players at school and club level, providing the resources to assist in their development to Academy level.

A former Leinster, Munster and Ireland lock, with over 100 provincial caps, Tipperary born Trevor began his career playing at Irish youth level, before joining Munster in 2002. He moved to Leinster in 2006 where he represented the blues for five seasons. He was involved in Heineken Cup winning squads with both provinces (2006, 2009, 2011). He made four appearances for Ireland and earned 15 caps with Ireland A, before his retirement from rugby in 2011, following a knee injury.

Trevor graduated from Dublin City University in 2002 where he obtained an honours degree in Journalism. In 2014 he received a first class honours degree in History and English from University College Dublin, and went on to complete a Professional Masters in Education, qualifying as a second level teacher, before embarking on his current role.